Apple’s iPhone 7 hit shelves earlier this year in September to mixed reviews. Some praised it’s processing power and ability to “dramatically improved the most important aspects of the iPhone experience”, whilst others criticised it for its lack of innovation and the now infamous removal of the 3.5mm headphone jack.

Cost, colour and capacity are the big three when it comes to purchasing a new iPhone. Most people focus on the price first and then the colour, but one of the most important, and sadly an often overlooked factor, is the storage capacity of the device being purchased.

Are you snap happy? Do you download a lot of music? Watch a lot of movies or binge TV shows? If you answered yes to any of those questions, then don’t withhold on storage — purchase the largest capacity phone you can afford. There are many people who would opt for the 32GB iPhone to save money, but that decision turns out to be a mistake when they hit a wall because their device is filled to its maximum capacity. Deleting photos and removing apps every time you want to download a new album is a drag.

The iPhone has no USB or SD ports, meaning there’s no way of quickly getting extra storage or checking out photos a friend gives you on a memory stick. This is where external storage devices and adaptors come in. Here are 5 excellent external Lightning-enabled flash storage devices for your iPhone 7 (follow the links on the respective device titles if any of these tickle your fancy): 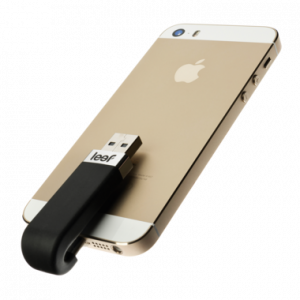 The original Leef iBridge was one of the first dual-interface devices that included both USB and Lightning interfaces so that you could easily transfer files between Macs, PCs and iOS devices. It’s been updated since we last saw it, with the Leef iBridge 3 being the latest addition to the family. It features USB 3.1 and Touch ID protection too, providing speedy, secure transfers. It also boasts a 256GB option – which is as much as many of the MacBook laptops these days, and more than most of its memory stick rivals.

The iBridge 3 weighs just 12g, so it’s easy to carry around in your pocket, and the silicon and aluminium case can cope with being banged about in a backpack when you’re travelling. 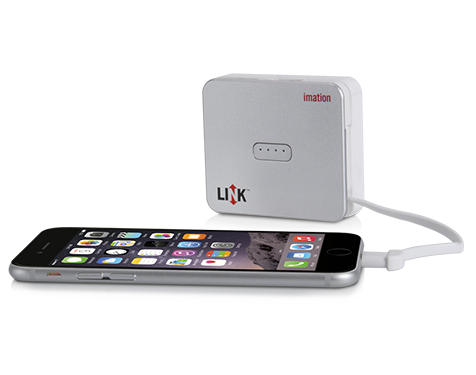 The first of the Power Drive’s twin conveniences comes courtesy of a 3000 mAh battery inside a petite block weighing a mere 110 grams. Measuring 2.9 by 2.5 by 0.87 inches, the diminutive Power Drive isn’t going to be a comfortable fit in many pockets, but it’s unobtrusive enough to be carried just about anywhere else.

Wrapped around the right edge is a short (5.3 inches) Lightning cable, used to connect an iOS device for charging, as well as access to documents and media stored on its internal storage. Tucked along the opposite edge is a two-inch USB 2.0 cable for topping off the internal battery or transferring files to and from Mac or PC.

Imation Link can also share stored content to social networks or cloud services Dropbox, Google Drive, or OneDrive. The app works with most popular media file types like MP4, MOV, MP3, and M4A, but AVI and MKV lovers need not apply. PDF, text, and even Word documents can be previewed or copied to compatible apps via the iOS share extension.

Power Drive is well thought out and executed, and will be welcome relief for those stuck with low capacity iPhones. There’s even a little tray that slides out from underneath to prop up your device in landscape mode (a feature that works with iPad, too) for kicking back and viewing photos, watching videos, or reading documents.

This diminutive Lightning-based drive holds a micro-SD card, all in the span of about an inch-and-a-half. Apple has never supported microSD card memory directly, and other flash solutions have provided some capability for backup and bringing content along on the road, but nobody has done it in such a small package without onboard power. The trick, it appears is low power SD Cards.

Unlike Apple’s SD card reader, the CR-8800 isn’t just a photo transport device. The accompanying supports “Open-In,” meaning users can leverage other installed apps that can read the various file types. The device also supports most file management features, including renaming. Some pretty unique features include backing up your content from services like YouTube and Facebook, and support for a wide range of video and image formats not native to iOS, including Windows Video. The device will even store some streaming content like that from YouTube, in its app-memory.

If you want to take along more movies or music than your iPhone or iPad can carry, or you want to backup your photos,, the CR-8800 is going to offer great features in the smallest possible package, all without the overhead of needed to be charged itself. You may have other use cases that call for top notch storage on your portable device. If those use cases include standard file types and well-known storage options, then the CR-8800 will probably fit your needs for offline backup or file transfer. 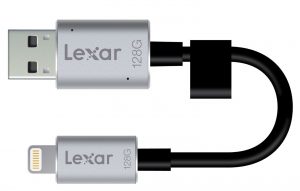 With today’s overflow of content, created, captured, and consumed, it’s easy to run out of space on your iPhone or iPad. Now you dont need to delete your favourite photos and videos to make room for more. The multitasking Lexar JumpDrive C20i flash drive makes it easy to offload, add, or back up files, as well as charge your iOS devices on the go. No battery needed and no network required.

With both Lightning and USB 3.0 connectors, this high-speed, 3-in-1 iOS flash drive makes it easy to move files on the go, so you have extra space to store more of the content you crave. It not only makes it easy to offload and transfer files, but it also allows you to listen to your favourite songs and watch videos right from the drive.

Multitasking goes upscale with the sleek metal finishing of JumpDrive C20i. It also comes with a cable clip to keep it folded for storage. The Lightning connector fits with most iOS cases, and with its ability to offload, back up, and charge your iOS devices, it is a true workhorse for road warriors or anyone on the go.

JumpDrive C20i works with use of a free file management app on the App Store . The app also allows you to back up files when connected. And with capacities from 16GB to 128GB, you can offload lots of content from your devices to create room for even more. 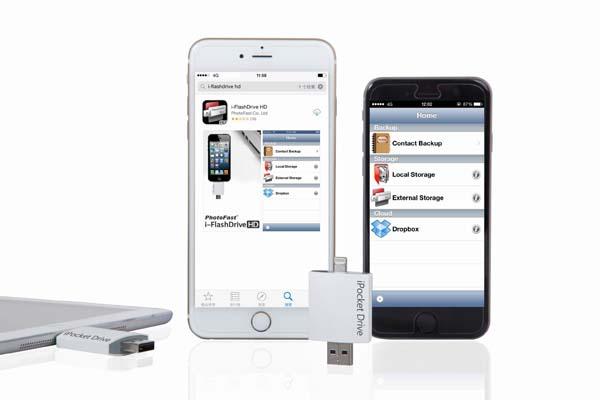 Similar to the Leef iBridge, the iPocket Drive utilises a physical Lightning connection as opposed to a wireless one. The 30.6×51.8×9.8mm iPocket Drive boasts a large collection of capacities from 8GB to 256GB and is compatible with both Mac and PC. When you plug the iPocket Drive into your device for the first time, you’ll be prompted to install the iPocket Drive app to browse your files.

Using the app, you can do more than browse your files – you can copy them, move them around and even rename them. Backing up your complete contact list (not just the name and number but the photo, email address, etc) is a simple process too, requiring only a single tap within the app. The iPocket Drive can also charge your iOS device when plugged into a USB outlet, negating the need to carry around a wire with you all day!

The AER – Throw your GoPro