Are you getting the most out of your camera device by using the right kind of SD card?

Memory cards are used in digital cameras, music players, smartphones, tablets, and even laptops. But not all SD cards are created equal — there are different speed classes, physical sizes, and capacities to consider. Most of you know the difference between an SD card and a MicroSD card, but do we know what the difference between Speed Class and Speed Performance is? If not, well, you’re in luck.

In a nutshell, not all SD cards offer the same speeds. This matters for some tasks more than it matters for others. For example, if you’re a professional photographer taking photos in rapid succession on a DSLR camera saving them in high-resolution RAW format, you’ll want a fast SD card so your camera can save them as quickly as possible.

A fast SD card is also important if you want to record high-resolution video and save it directly to the SD card. If you’re just taking a few photos on a typical consumer camera or you’re just using an SD card to store some media files on your smartphone, the speed isn’t as important.

Manufacturers use “speed classes” to measure an SD card’s speed. The SD Association that defines the SD card standard doesn’t actually define the exact speeds associated with these classes, but they do provide guidelines.

You’ll probably be okay with a class 4 or 6 card for typical use in a digital camera, smartphone, or tablet.

All Class 2, Class 4, Class 6 and Class 10 SDHC cards are compatible with SDHC devices. Please note that if the device manual suggests an SDHC card of speed Class 4 as a minimum, the user should install a Class 4, Class 6 or Class 10 (faster) SDHC, NOT a Class 2 card as this may reduce the performance of the device.

What are speed ratings for SD / SDHC cards?

The speed rating measures maximum transfer speed for reading and writing images to and from a memory card expressed as megabytes per second. However, a video doesn’t need as big a data pipe because the video format is a smaller “fixed stream” that uses only a portion of the data pipe.

What is speed class for SD / SDHC cards?

Unlike card write speeds that measure maximum performance, class ratings measure the minimum sustained speed required for recording an even rate of video onto the card. The class rating number corresponds to the transfer rate measured in megabytes per second.

What does this difference mean for me?

Rated Speed (e.g. 15MB/s, 30MB/s, etc.) is the maximum speed of the card and also what you would expect to approximately see in typical usage of writing or reading files on the card. This measurement is pertinent to still photography, where the files created, are very large. The faster the card, the faster it can save the file and be ready to take another picture. You can really notice speed differences with high-megapixel DSLR cameras when using multi-shot burst mode.

Speed Class is a minimum speed based on a worst case scenario test. The Speed Class is important for video mode or camcorders, where the device is actually saving a steady stream of data. The resolution and format of the video determine the amount of steady stream data. This translates to a minimum speed you need to guarantee that the video captured on the cards is recorded at an even, sustained rate with no dropped frames (which would result in lost data and choppy playback).

When buying an SD card, you’ll need to buy the right speed class, size, and capacity for your needs. Be sure to check what your device supports and consider what speed and capacity you’ll actually need. 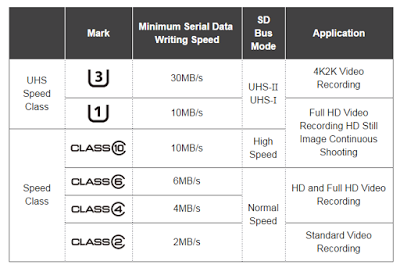 It might sound obvious, but the safest way to make sure you buy the correct card is to first consult your product’s user guide or specifications, at least to be sure if your device takes full-size SD or microSD cards. Checking before you buy an SD card is particularly important if your device has specific requirements, such as many 4K camcorders. These will usually explicitly state what type of memory card is required in order to record at the top resolution or bit rate.

If you’re not recording in 4K, the speed might not be so important. A faster-rated card will still be useful if you’re using the card to expand the storage in a smartphone or laptop, as a faster read and write speed will make it more responsive. Faster cards in a still image camera will also mean being able to take more or faster photos in burst mode, as these can be written to the card far quicker. Class 10 cards are usually not much more expensive so it’s worth paying the extra if you can afford it.

Now you are aware of speed class and speed performance, head to our website now to view our full range of memory cards.

Samsung Announce Galaxy A7, A5 and A3