Samsung announced that it has begun mass producing the industry’s first 512GB SSD with non-volatile memory express (NVMe), fitted in a single ball grid array (BGA) package, for use in next-generation PCs and ultra-slim notebook PCs.

The new drive, named PM971-NVMe, contains all essential SSD components including NAND flash memory, DRAM and a high-performance controller. But the most impressive fact about PM971-NVMe is its size. Samsung managed to merge all the components into a package that is smaller than a standard US postage stamp. The SSD measures 20mm x 16mm x 1.5mm and weighs only about one gram. 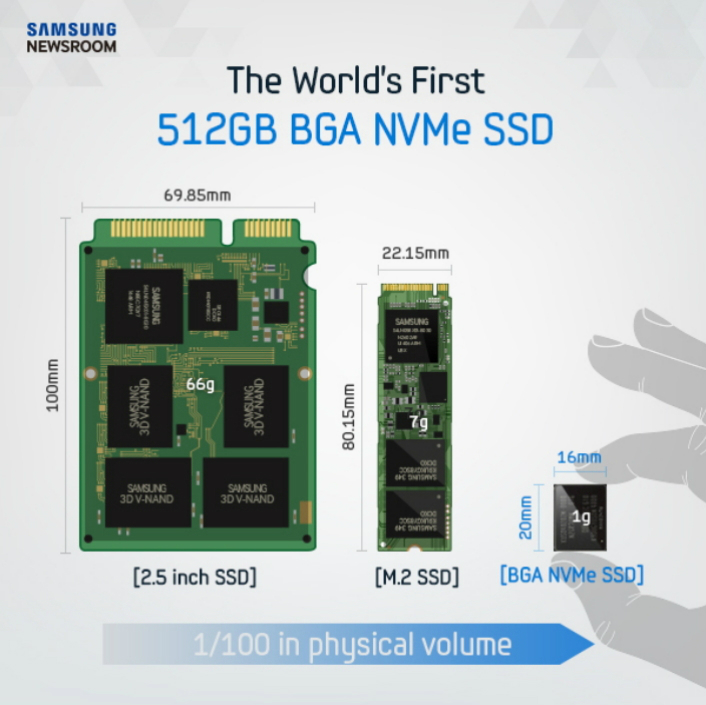 Samsung claims that the tiny drive triples the performance of a typical SATA SSD. Its read/write speeds of up to 1,500MB/s and 900MB/s mean you could transfer a 5GB HD video in 3 seconds. It is also up to 1500 times faster than a standard hard drive when it comes to random read/write input-output operations per second (190K and 150K, respectively).

Samsung will start selling the drive this month in 512GB, 256GB and 128GB models.

You can find a selection of Samsung products, computer accessories and computer memory in our shop.