The entertainment industry has long struggled with the problem that original movie footage is stored on 35mm film, which is relatively sensitive and will eventually fade.

However, Microsoft has developed a new technology for storing movies that could help to preserve data and ensure old movie footage isn’t lost. This unconventional initiative allows high volumes of data to be stored on a piece of hard silica glass.

Known as Project Silica, Microsoft has recently teamed up with Warner Brothers to showcase how this new technology works by storing an entire copy of 1978’s Superman movie on glass roughly the size of a drink coaster. The piece of glass measures 75mm x 75mm and is 2mm thick.

According to Microsoft News, upon learning of the research, Warners Brothers approached Microsoft as they have always been on the lookout for new methods to store their vast asset library and to safeguard backups. Currently, the entertainment company converts a digital copy back to analogue film and splits it into three colour components to create an archive copy, as stated by The Verge.

Microsoft has claimed that the hard silica glass can hold out against being boiled in hot water, baked in an oven, microwaved, and even flooded.

“That had always been our beacon of hope for what we believed would be possible one day, so when we learned that Microsoft had developed this glass-based technology, we wanted to prove it out,” said Warner Brothers Chief Technology Officer Vicky Colf. 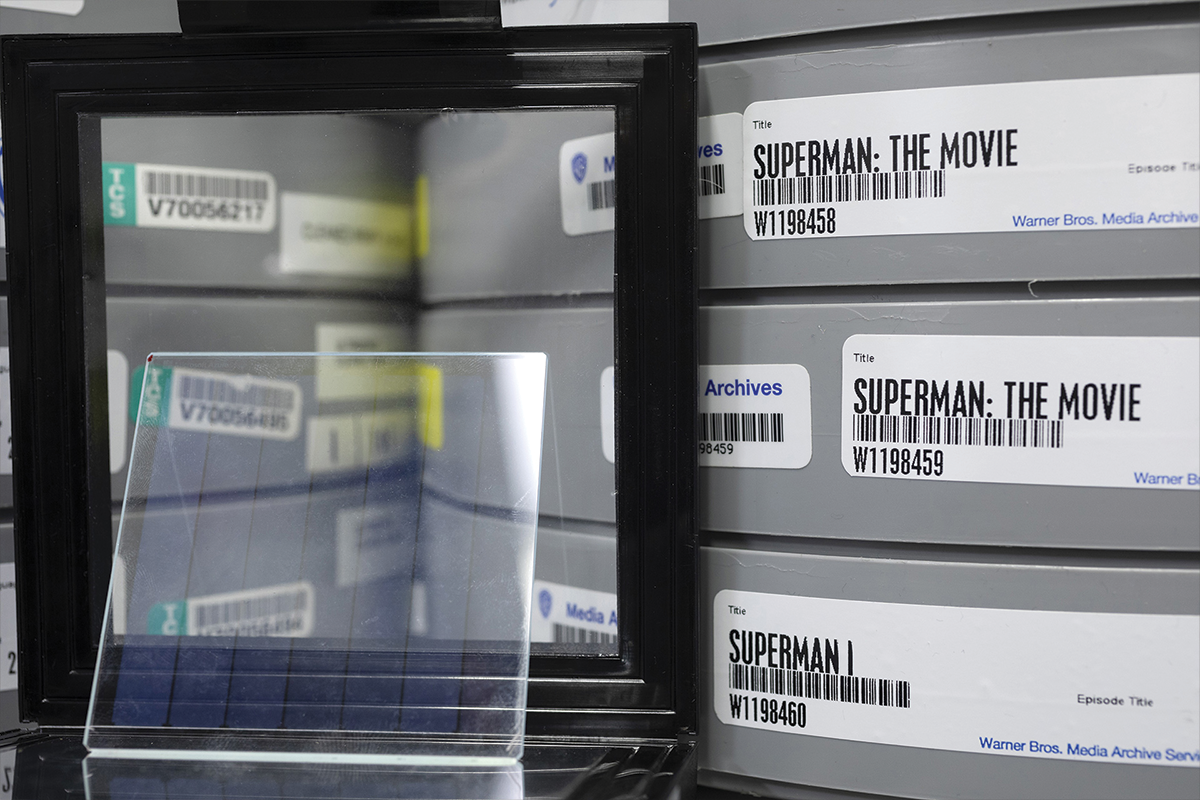 The film “Superman” is shown on reels of film and on glass in a cold storage vault. Photo: John Brecher for Microsoft.

Project Silica uses lasers to burn small shapes, known as vowels, into the surface of a piece of glass. Each one of these vowels holds multiple bits of data engraved onto multiple layers. Typically, optical discs such as CDs, DVDs and Blu-Rays only have 2 layers, whereas Microsoft’s glass disc storage can hold numerous layers. The tech-giant actually compressed a total of 74 layers into the disc that holds Superman. To access what is on the glass disc, Microsoft then uses machine learning algorithms to decode the small burns which hold the data, whilst a polarized light shines through the glass panel.

Each piece of glass can store 75GB worth of data. While it may not seem like a large amount of storage in comparison to other data storage solutions currently on the market, the glass panels can hold data for hundreds of years, without the risk of degradation issues.

Will glass be the future of data storage?

Many people aren’t aware that despite storing everything in “the cloud”, all of their information still needs to be physically stored on a device elsewhere. This data is typically held on hard drive storage from a different location. As hard disk drives have a lower shelf-life, storage costs are increasingly rising due to the frequent need to transfer data onto newer storage devices before the data is lost.

Microsoft claims that glass storage has the potential to drive down costs of long-term storage by offering the need to only write the data onto the glass once. Warner Brothers anticipate that Project Silica may show to be a cheaper alternative to storing physical archives of footage.

“If Project Silica’s storage solution proves to be as cost-effective and as scalable as it could be — and we all recognize it’s still early days — this is something we’d love to see adopted by other studios and our peers and other industries,” says Vicky Colf.

The possibilities this new technology presents in regards to storing data on a vast mass storage scale are super-beneficial. However, as it is still in the early stages of development, it’s highly unlikely that people will start to store data on laser-engraved glass within the near future.

So although you may not be using a glass disc to save photos from your family holiday anytime soon, this new storage method could create a solution to the entertainment industry’s age-old problem and help to preserve original film footage indefinitely.

Looking to store or backup data yourself? Head to our website now to view the best data storage solutions currently available.

How Can AI Promote Advances in Cybersecurity and Threat Analytics

A Beginners Guide to Wedding Photography