HyperX was born from Kingston Technology, the world’s largest independent memory manufacturer, as part of a goal to provide gamers, PC tuners, and tech enthusiasts with products designed to meet the most rigorous demands.

As a brand which began in 2002 with only one line of high-performance memory, HyperX has grown to become a global leader in regards to reliable products with the highest performance standards. The brand now offers multiple product lines of memory modules, solid-state drives, USB Flash drives, gaming headsets and more. Whether you are a gaming newbie or seasoned pro, everything built by HyperX is designed with the gamer in mind.

In particular, the HyperX FURY range of memory modules allows even newbies to get up to speed fast, since FURY recognises its host platform and automatically overclocks, to provide plenty of power for your next deathmatch. For entry-level upgraders, enthusiasts, and system builders HyperX FURY offers an effortless upgrade for your gaming PC. Plus, it’s asymmetric heat spreader design and multiple colourways lets you stand out from the crowd and allows your rig to reflect your style. 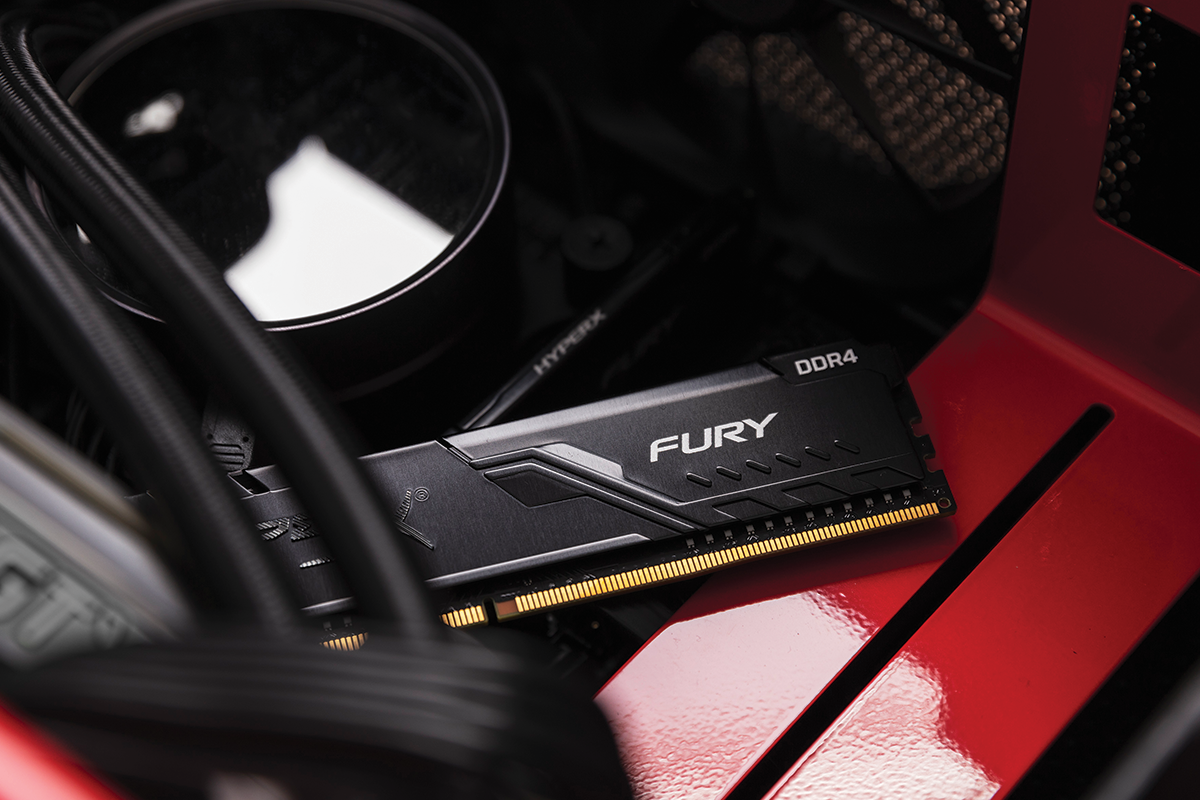 In addition to the various product lines, HyperX is also the sponsor of more than 20 gaming teams globally and the main sponsor of Intel Extreme Masters and Dreamhack festivals. The brand has also broken memory world records and has won multiple awards, including three Red Dot Awards in 2018.

We caught up with Vice President at HyperX – EMEA, Paul Leaman, to talk about the brand and what’s next for the high-performance product division of Kingston Technology. Check out the full interview below.

The HyperX team is very passionate about what they do. Are you a company of gamers?

We’re All Gamers here at HyperX, as is everyone around the world. Whether you play one hour a day on a mobile commuting to work or train eight hours a day to compete in esport competitions, gaming has become a unifying activity that we all share in. The team behind HyperX has evolved over the last eighteen years from a DRAM and SSD brand for PC gaming to manufacturing gaming gear for all gamers, whatever their gaming platform, and is made up of different individuals working passionately together to ensure HyperX becomes the number one gaming lifestyle brand globally.

Being the sponsor of more than 20 gaming teams globally and the main sponsor of Intel Extreme Masters and Dreamhack festivals, what are your personal favourite competitive games to watch?

Having to choose which game is our favourite to watch, is like asking which of your children you love the most. We have sponsored and attended hundreds of esports events globally and manufactured products for most game genres such as the Alloy FPS for first-person shooting games or our Alloy Elite for MOBA gamers, and what really makes the game’s fun to watch is the atmosphere. At a stadium that is packed with 30,000 people all cheering for their favourite teams, and seeing the highs and lows the players go through during the competition is what draws you in, along with the casters who do a fantastic job of broadcasting the fast action and creating an exciting narrative for the crowd to follow.

In 2012, HyperX decided to focus on esports. How did this decision help to move the brand forward?

HyperX had invested in esports way before 2012. In 2006 we sponsored a Quake tournament, the first competition of its kind in China, which saw players compete in a global tournament where the top prize was a Kia car. HyperX then started investing in teams such as SK Gaming with Dram and SSDs and since 2014, when the HyperX Cloud, our first gaming headset, was launched, has been supporting pros with gaming peripherals. This has since developed into a whole line-up of Cloud headsets and we now offer a range of keyboards, mice and accessories to enable players to reach their full potential. Therefore, it was not a decision to focus on esports but to support communities, and esports is very much part of the gaming community.

Gaming has become a global sport. In which country have you seen the largest audience growth in the last year?

The esport scene is growing exponentially with more and more non-endemic brands entering the market and dropping a lot of money to sponsor teams and events. However, it’s difficult to say which country has seen the largest growth in esports because it’s completely dependent on the game. CS:GO, for example, is huge in the Nordics but less so in Asia where DOTA 2 has a huge following along with mobile gaming. What we can say is that the industry is continuing to grow and according to NewZoo has topped $1billion last year.

What has been the high-point for HyperX since forming in 2002?

The eighteen-year journey of HyperX has been a long journey but to see our peripheral line develop over the past five years has been truly phenomenal. Starting with the original Cloud headset back in 2014 and then to go on and become the manufacturer of the Cloud II, the best-selling PC gaming headset in the US and many European countries is a proud achievement. However, at HyperX we know that just like the gaming industry, we must continue to evolve our offering and for that, we listen to the communities to see what else they want from us. We still have a way to go to become the number one gaming lifestyle brand globally but if what we have achieved in the past few years is anything to go by, it’s within our grasp to do so.

What would you say is a key component which differentiates HyperX from competitors in the gaming market?

Since launching the HyperX brand we have always ensured good quality products with excellent customer service, something we have learnt from our parent company Kingston Technology. As we have grown our portfolio, we have continued to ensure our products are of high quality and are comfortable. The Cloud headset range, for example, is known for being extremely comfortable due to the memory foam used in the headbands and ear cups and delivers high-quality audio due to the 50mm drives. We also recently launched the Alloy Origins, which is made with our own HyperX switches and a chassis which is aircraft-grade aluminium.

What feedback do you get from the gaming teams about your products, and is their feedback used to shape future products?

Before launching any new product, they go through a series of testing processes which involves not just our esport teams but the wider community, including our community of streamers and fans. By compiling feedback, we can identify any faults in design or criticisms which may not have been identified in the manufacturing process. This process on some occasions has led to delayed launches to ensure the product we launch is what the community wants.

Module lighting has been a huge hit. What do you see being the next big trend in PC gaming?

This year at CES 2020, we launched higher capacity and speed additions to our FURY DDR4, FURY DDR4 RGB and Impact DDR4 SODIMM line-up of memory. Now our FURY memory reaches up to 3733MHZ, some of the fastest in the industry along with kit capacities of up to 64GB. We see this trend will continue into 2020 and with the introduction of DDR5 memory will push PC Gaming to another level.

As the broader PC market is constantly changing, will HyperX be moving into other product areas in the future?

We have already expanded our offering. In 2018, HyperX launched our first licensed headset, the Cloud for PS4. Since then we have expanded the PlayStation licensed products and launched a whole Xbox range as well. Most recently, we launched the ChargePlay Clutch for Nintendo Switch which enables the gamer to play longer, which is perfect for those long car journeys or long-haul flights. We have also diversified into supplying QI charging compatible charging units with our ChargePlay Base that can be used to recharge our first truly wireless Cloud Flight S headset and wireless Pulsefire Dart mouse as well as the ChargePlay clutch for QI charging compatible mobiles. It really is an exciting time for HyperX and we have more to announce later this year.

The gaming industry has never been more exciting. Where do you see it in 5 years time?

We are in a state of change in the gaming scene because it is growing exponentially. Old and new gamers today expect more than ever that they can play games of their choice anytime, anywhere and on any device. With the growing rise in streaming platforms such as Netflix, it is no wonder Google has announced Stadia, and at the end of last year, Xbox announced their cloud gaming platform Xcloud, which will enable gamers to simply download their last gameplay and continue from where they left off. However, more investment is needed by governments and businesses globally to ensure ultrafast internet connections are possible so as not to decrease the gamers experience; as I am sure we have all experienced the terrible buffering screen during an intense film. So what does this mean for HyperX? Well, we will continue to listen to the community and grow towards supporting them play to the best of their abilities, whether it be online with friends or against AI technology, which will no doubt become an increasing trend across not just gaming but all technologies.

Be sure to head to our website now to view our full range of HyperX products.

Everything Announced at Samsung’s Unpacked Event 2020