Lots of the hi-tech devices we come across in cars originate from top-line motorsports, such as Formula 1. This often starts by appearing as a costly high-end option and subsequently tends to trickle down with time into the mainstream market. Not to mention, that kind of tech typically regards safety or appearance, so it is frequently left to car manufacturers to develop a few of the far more niche and imaginative developments. Recently, Ford has developed an innovative technology, where a challenging system has been built to give people who are blind a concept of exactly what is outside of a car window.

The moving countryside, a dapple of the light through the tree branches, little instances of love that you pass on the street corner, they are visual experiences most of us ignore when driving a car. On the other hand, for the people who cannot see, the concept of watching out the window of the moving car symbolizes the broad range of scenery they will never be in a position to enjoy. Feel The View from Ford is a breathtaking innovation helping the blind ‘feel’ the view!

What is Ford’s Smart Window?

Ford has designed a different haptic visual language, which allows blind individuals to feel the view via the window of a car. This Feel the View intelligent window captures a picture of surrounding scenery, as well as translating this into vibration on a responsive display which a passenger will explore through the touch. Ford released a video which explains the technology of the car as “letting passengers to feel the picture and rebuild the surroundings in their mind before them.”

The smart window by Ford translates pictures into a responsive display. Feel the View derived from a brainstorming session the Ford team in Italy with the help of local startups. Ford appreciated the concept and funded a prototype that was designed by innovative agency Aedo Project and GTB Roma, a startup aimed at making gadgets for people who are impaired visually.

The window features a built-in camera, which at the press of a switch, photographs the lovely view beyond this. The picture is converted into a high contrast grayscale picture and reproduced via small LEDs inlaid into the glass.

Although this particular reproduction is hidden to naked eyes, the LEDs offer haptic feedback, which vibrates at various intensities related to various colours of grey – the brighter the colour underneath your tips of the fingers, the higher intensity of the vibration will be. There are approximately 255-levels of the vibration available.

The characteristics of Feel The View: 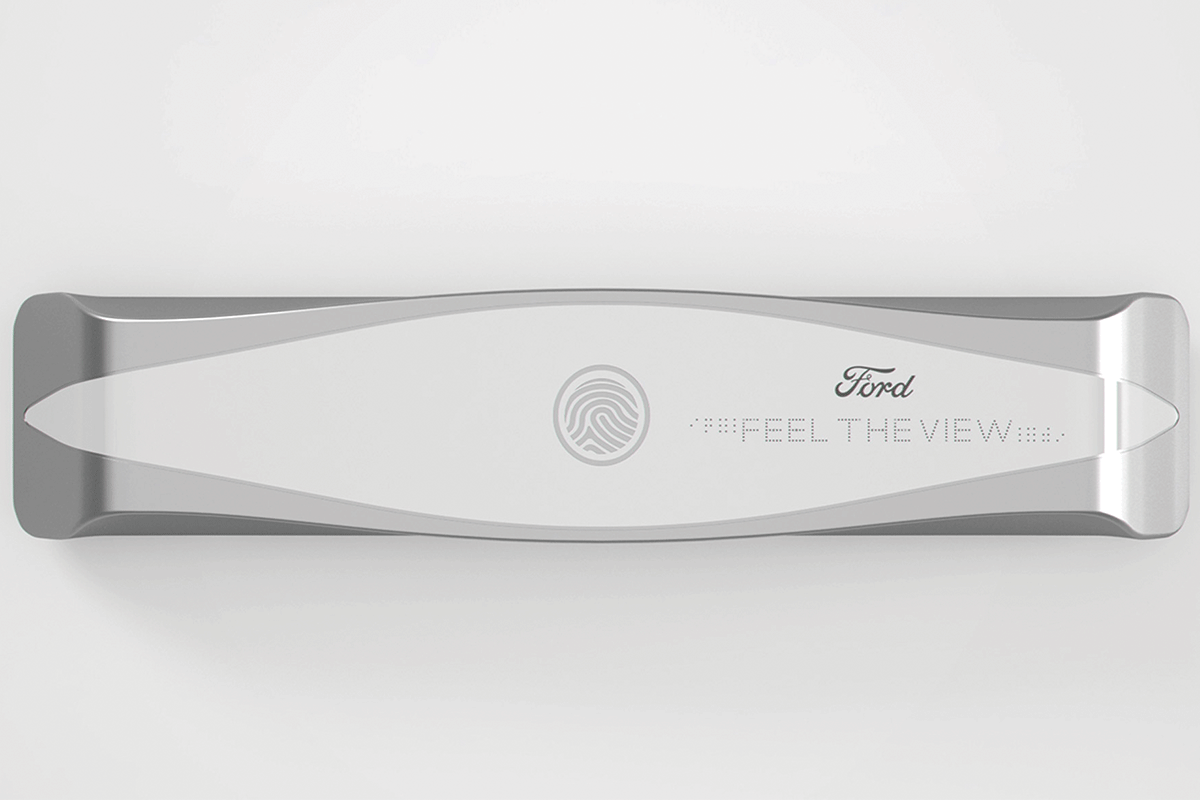 The great part of going on a holiday is being able to view all the wonderful places and sights during the trip. This is notably true for the very beautiful landscapes with rolling mountains or hills. Ford claims that blind people on these excursions are getting left behind on this important part of the experience.

For helping the visually impaired people to be in a position to enjoy the landscapes outside the vehicle, Ford has prepared something it explains as the prototype smart window for a car. The system works in the following way:

Ford claims that the Feel the View strategy was designed by a group in Italy as well as in collaboration with GTB Roma and Aedo. Worth mentioning, Aedo is actually a local startup which specializes in generating gadgets for the individuals who are impaired visually.

The concept is to utilize this kind of technology to switch the boring task of journeying for blind people into something which they can easily have fun with. A video was released which gives a concept of how this system works. There’s no indication when or if this gadget will be accessible to buy.

From the rolling hillsides to the mountain ranges, landscapes make any journey memorable, however, for the blind travellers; this is a part of the experience which they miss always. A prototype smart window for car seeks to convert this – through enabling the blind or to some extent-sighted individuals to imagine the passing scenery via touch.

Features of the smart window: 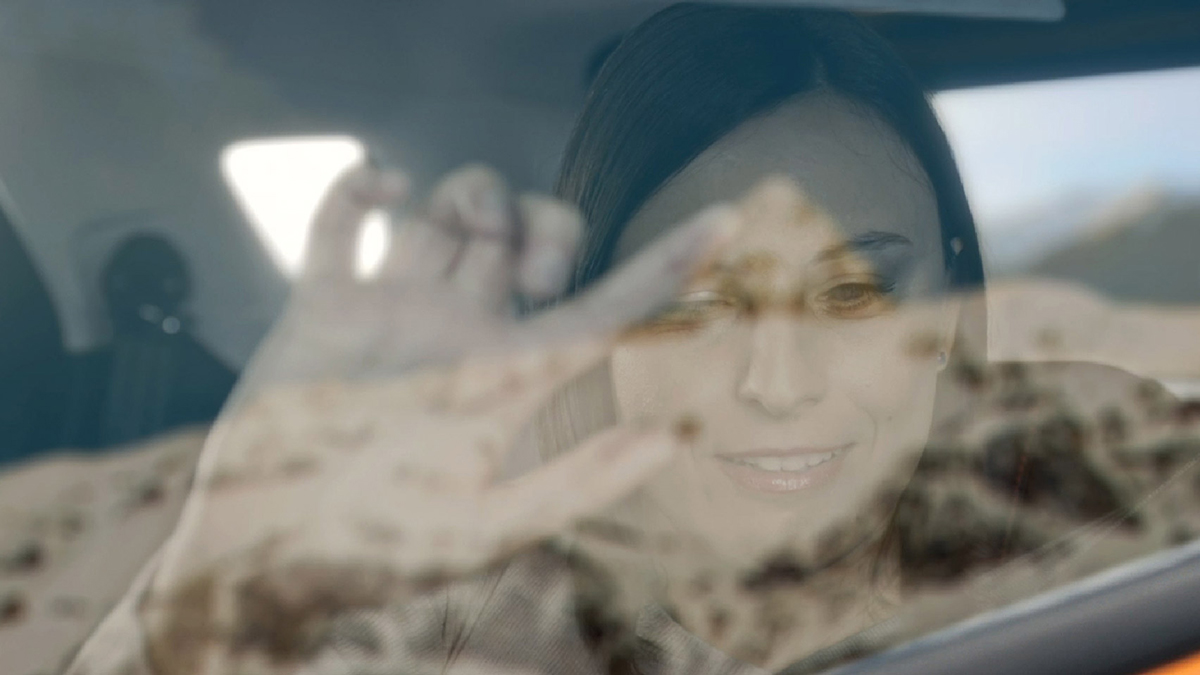 On top of enabling the blind to feel the passing scenery, Ford’s latest innovation also offers various elements which will help to enhance the journey.

On top of that, this smart window is included with a voice assistant, which offers contextual details regarding the surrounding scenery through the audio system of the car.

“We try to make the lives of people better and it was a wonderful opportunity to assist blind passengers to feel a great part of driving,” mentioned the spokesperson, Marco Alù Saffi, for the Ford-of-Italy. “This technology is sophisticated, but the idea is straightforward – and can turn mundane trips into genuinely memorable ones.”

On the other hand, Feel the View connects to an increasing field of innovative designs which harness the technology to provide people with the visual impairment with different options to “see” this world surrounding them.

Emilios Farrington Arnas, the designer similarly utilized vibration in the Maptic wearable routing system, a graduation project of Brunel University, while Microsoft formerly joined with research team Future Cities Catapult for creating a headset which helped the blind people discover their ways around the cities through a 3D soundscape.

This field is actually of special interest to the car manufacturers, who, with the dawn of the autonomous cars, soon could be making products for the people who previously have been ruled out from driving because of disabilities. Not to mention, the camera converts the picture into the high contrast grayscale picture and reproduced via little LEDs inlaid in the glass.

The innovative system haptic feedback used in the Feel the View has potentially broader applications beyond the cars, with the GTB Rome explaining the notion as an innovative language.

Feel the View will take photos which are converted into high-contrast black and white images. They are then reproduced on glass utilizing exclusive LEDs. At the same time, by coming in contact with the picture, various shades of the grey will vibrate with an array of 255-intensities, permitting travellers to feel the scene as well as rebuild the landscape in mind before them.

Feel the View was conceptualized and manufactured by Ford’s group in Italy as well as GTB Roma in a venture with Aedo Company – a local startup which specializes in gadgets for the people who are impaired visually.

For many of us our car is like a second home, so ensuring your driving experience is as smooth as possible is very important. From having good fog lights to wheels that are in great condition, all of these requirements will ensure you have a safe and comfortable car to drive. But above having the right equipment for a smooth drive, it is all too easy for drivers and their passengers to take the views out of a car window for granted. Feel The View will finally allow the visually impaired to turn ordinary journeys into truly memorable ones.

Are you looking to enhance your overall driving experience? Then head to our website now to view our full range of accessories for your car.

A Day in the Life of a Samsung MicroSD Card

Expandable Storage: Why does Samsung Believe in it?