Every time Apple comes out with a new operating system, rumours and speculations flood the market. But now that iOS 13 is finally here, we know exactly what it offers. This update is slightly different from last year’s update as iOS 12 was built around performance improvements and rethinking how much we use our phones. Whereas the new operating system just launched, is looking to impress Apple users with several features they’ve been anticipating. As announced back at WWDC 2019, these features include Dark Mode, an improved Apple Maps, updated Photos app, and a new Reminders app. Additionally, there are other long-overdue additions like a swiping keyboard and UI improvements.

Within this article, we highlight the most important features of iOS 13. Let’s take a closer look. 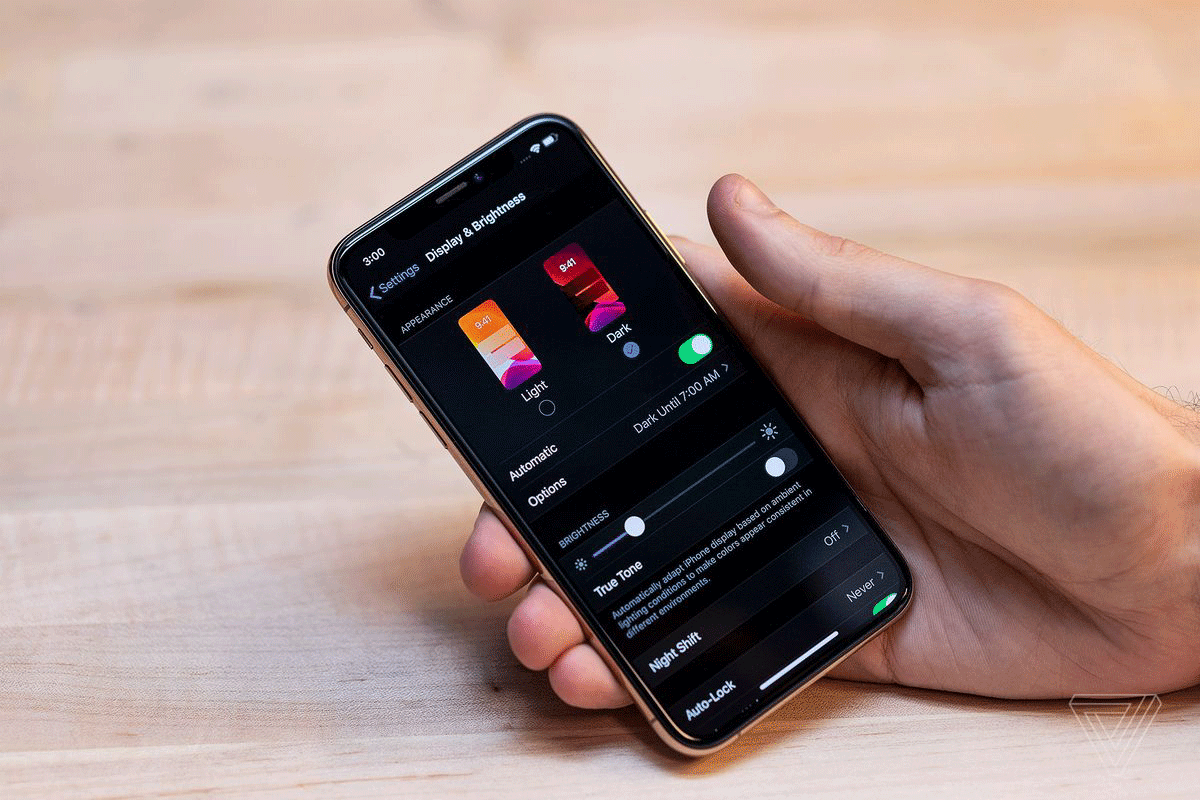 iOS 13 Features at a Glance:

Don’t have time to read the article? Here are the most important and best features of iOS 13:

One of the most sought after features on iOS 13 is Dark Mode. The systemwide Dark Mode option changes the entire OS from light to dark. If you choose to change your device to Dark Mode, the background will be black and type will now show in white and blue.  Users have been asking Apple for a full-time Dark Mode feature for some time, and this iOS finally delivers.

The black background means that it isn’t using any light to populate the pixels, which saves a lot of battery and looks very slick. It looks particularly striking on OLED panels of an Apple iPhone X or XS device. There are two options on how to use it; A toggle switches between two modes while an automatic function flips between them on its own based on the light outside. Dark Mode is available in nearly all of Apple’s major apps for the first time on iOS 13.

Compared to Google Maps, Apple doesn’t have the best reputation for its GPS application. Even people who love Apple download Google Maps and allow it to take up the extra space simply because it is much more accurate and precise than Apple Maps. However, the tech giant is working towards changing that.

They have added a street-view feature like Google’s, that allows you to look around at the locations in a real-world composite. It’s definitely not as comprehensive as Google’s, but Apple has continued to improve its map functions. This feature is a step in the right direction, but it will take a lot before it gets to the standard Google has.

Still, there are practical additions that will help convince people to use the app. According to the experts at the site MoneyPug, which is known as a platform to compare mobile phones, some of the new favourites include saving your locations and new real-time transit information. This is a crucial improvement because the app has lacked in this area. Additionally, new UI finally lets you view map directions while listening to music, something many users have criticised over the years. 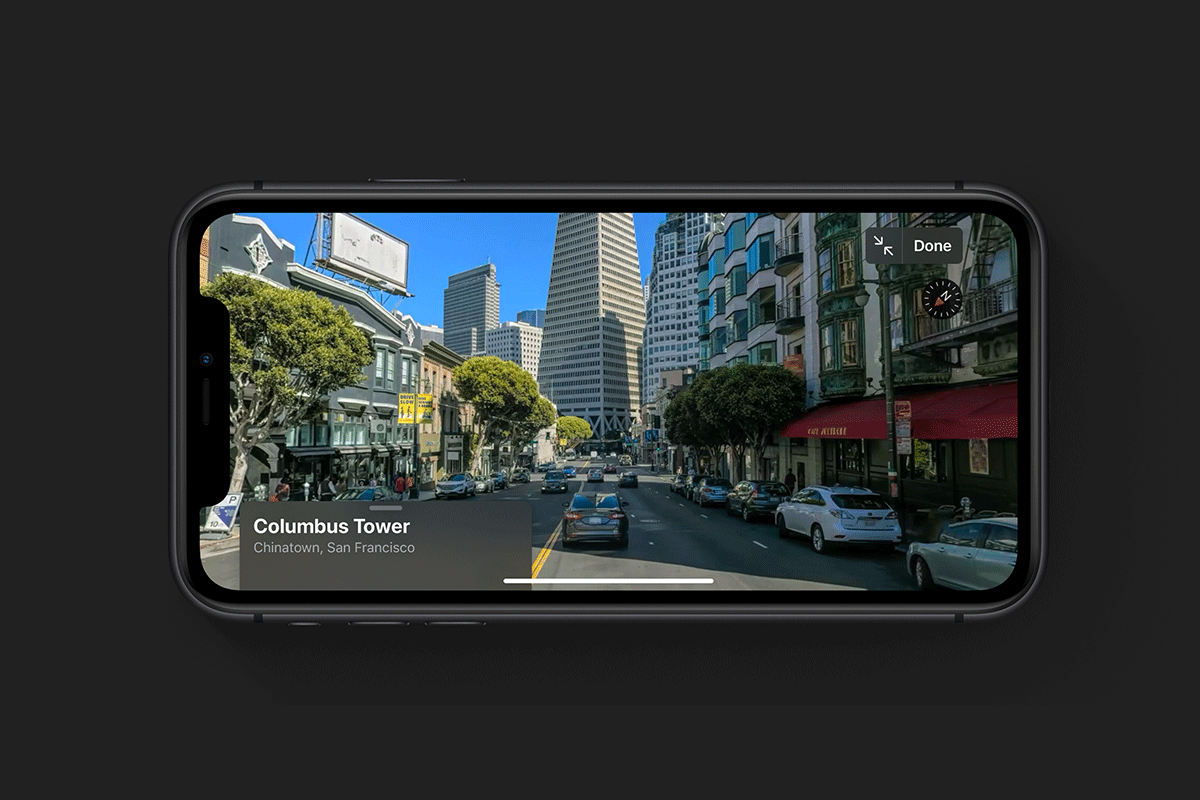 While universal log-in has been around for approximately ten years now, people are more familiar with it for Facebook and Google. This feature allows you to log into your account from third-party apps and sites. These log-in buttons have been made accessible in recent years, but Apple hasn’t adopted them until now. Similar to Google and Facebook, the universal Apple log-in allows you to quickly create accounts on websites and apps.

The big difference for Apple is that it only gives those platforms a minimum amount of information about you. This includes a randomized email address instead of your real one. Apple says they won’t track any of your activity on websites and apps you choose to use this feature with, but they have said that sort of thing before.

Apple’s biometric security system on iPhones, Face ID, has been included on their devices since the iPhone X. It allows you to unlock your phone, verify a purchase, and sign in to apps and sites just by looking at your phone. The improvements made to the feature with iOS 13 include speed. Apple claims it will unlock the phone 30 percent faster than ever before. You don’t need a new iPhone to get this speed boost either, Face ID is purely software-based. Meaning any compatible iPhone will unlock faster when iOS 13 is installed.

Just like Apple’s Map application, Siri is not as popular as Google Assistant or Amazon’s Alexa. They generally perform better in most tasks, but Apple is trying to improve Siri with iOS, making strides that make it a strong competitor. Siri’s new voice is now fully computer-generated instead of using prerecorded audio. The new voice doesn’t necessarily mean the AI will be better, but it does show Apple is working to improve its features that are lacking. 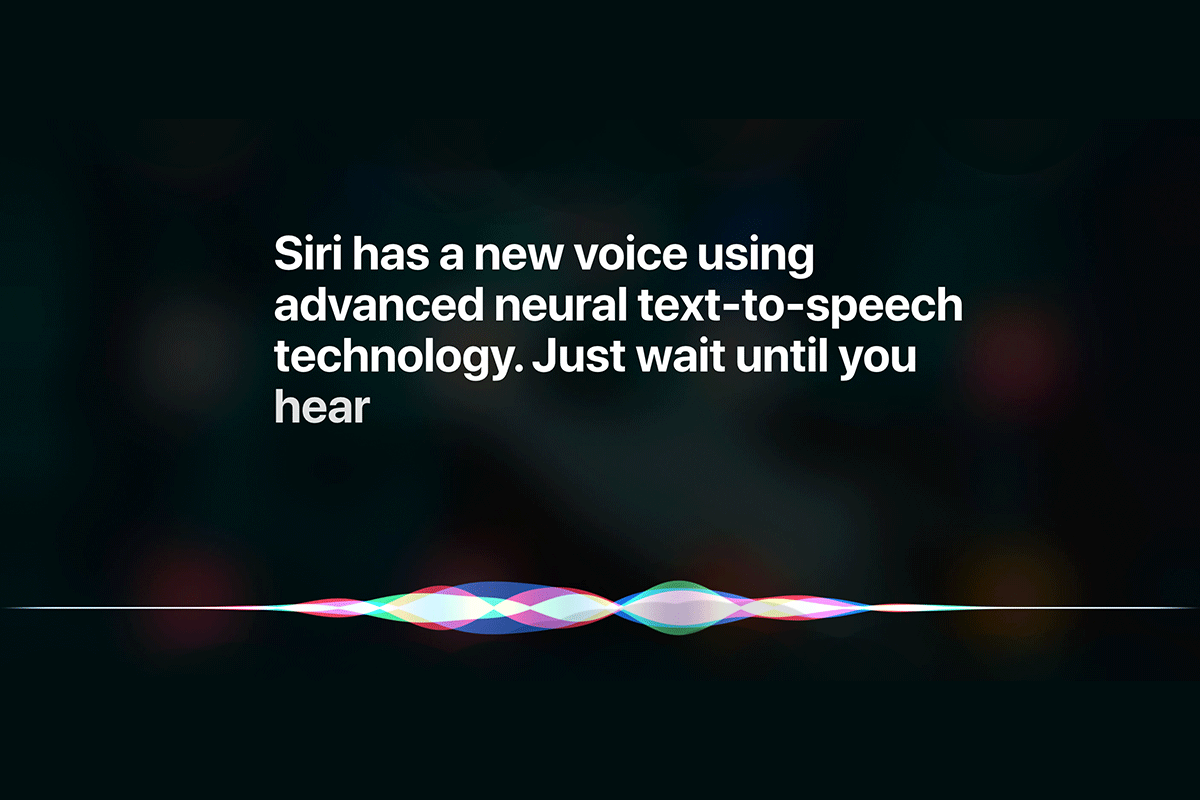 The new OS comes with privacy features that users are excited about. One of the new privacy features is a Bluetooth permissions setting. Now you can block apps from accessing your connection to Bluetooth. This allows you to connect wireless accessories like headphones without it tracking your location.

In addition to location privacy, the new operating system shuts down the vulnerability surrounding notes and contacts. You are now able to make them fully private. Even when you give an app the ability to access your contacts, it will no longer be able to access your notes.

The Reminders app, which is built into every iPhone and cannot be removed, has some improvements on iOS 13. It has been a staple of the operating system for years but it hasn’t been updated in a while. However, iOS 13 gets a complete revamp with an all-new interface with one of the best features being the new Reminders app. Even attachments are available on Reminders now. With these updates, the application will likely become even more popular.

The Reminders app has been revised with a revamped look and new improvements. It has been a staple of the operating system for years but it hasn’t been updated in a while. These new features will make the app more useful than ever before. With Reminders in iOS 13, it now comes with a new toolbar which allows users to add dates, times, flags and locations. 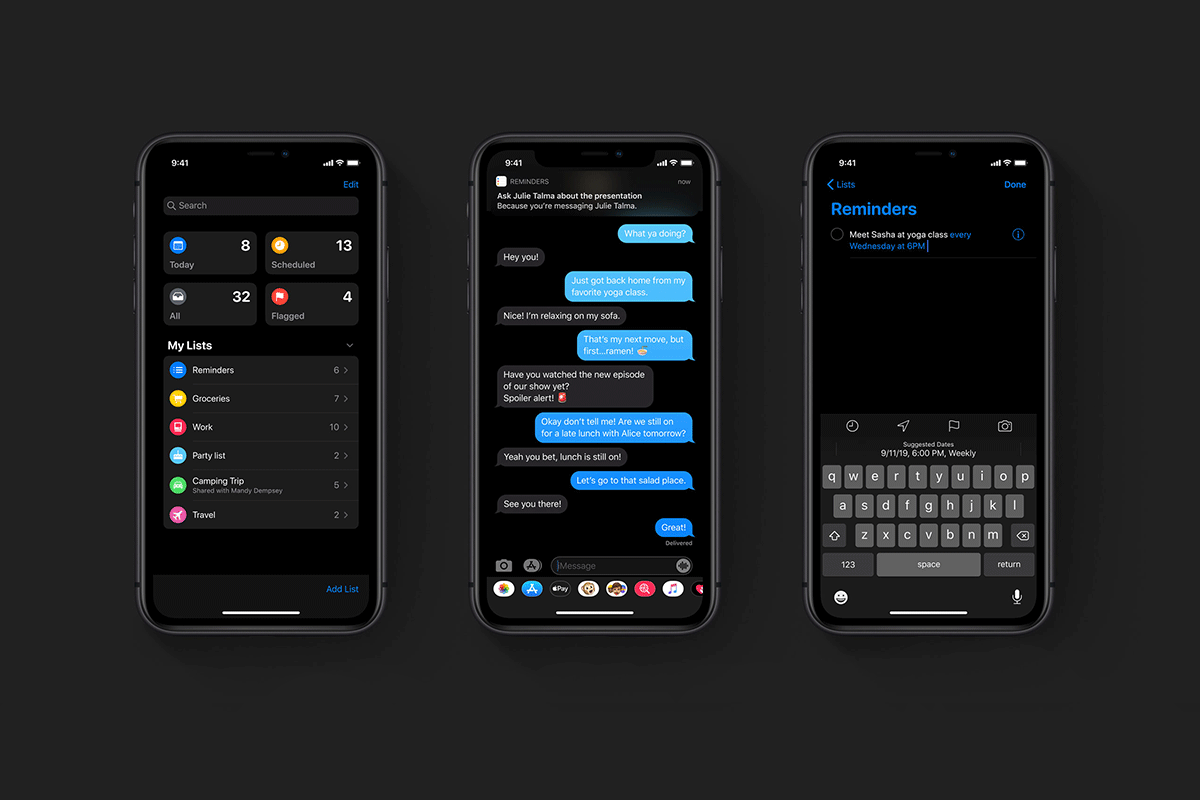 iOS 13 expands its capabilities as far as AirPods go. Two users will be able to connect their AirPods to one iPhone, so you will be able to listen to the same music or movies at the same time. AirPod sharing is a feature of iOS 13, but it won’t be available until the first update.

Apple’s new Voice Control feature in iOS 13 allows users to operate your device solely with your voice, rather than having to touch your phone – a feature which will prove to be helpful for a lot of people, we are sure.

Although Dark Mode is the most-anticipated feature of iOS 13, the new Photos app is perhaps the best bit. Apple completely overhauled the Photos app in iOS 13 to make it easier to flick through photos and have a more competitive edge over third party apps in terms of editing tools. The new feature organises your photos library to only show you highlights from that period of time. Although you are seeing less, it is switching to a much more useful view.

Additionally, Apple has updated photo editing tools to make it easier for you to edit your images, as well as now allowing these tools to edit videos. In iOS 13 you can now make Portrait Lightning adjustments, create monochromatic looks and use a scrolling list to make different adjustments to images – similar to the editing sliders used within Instagram. 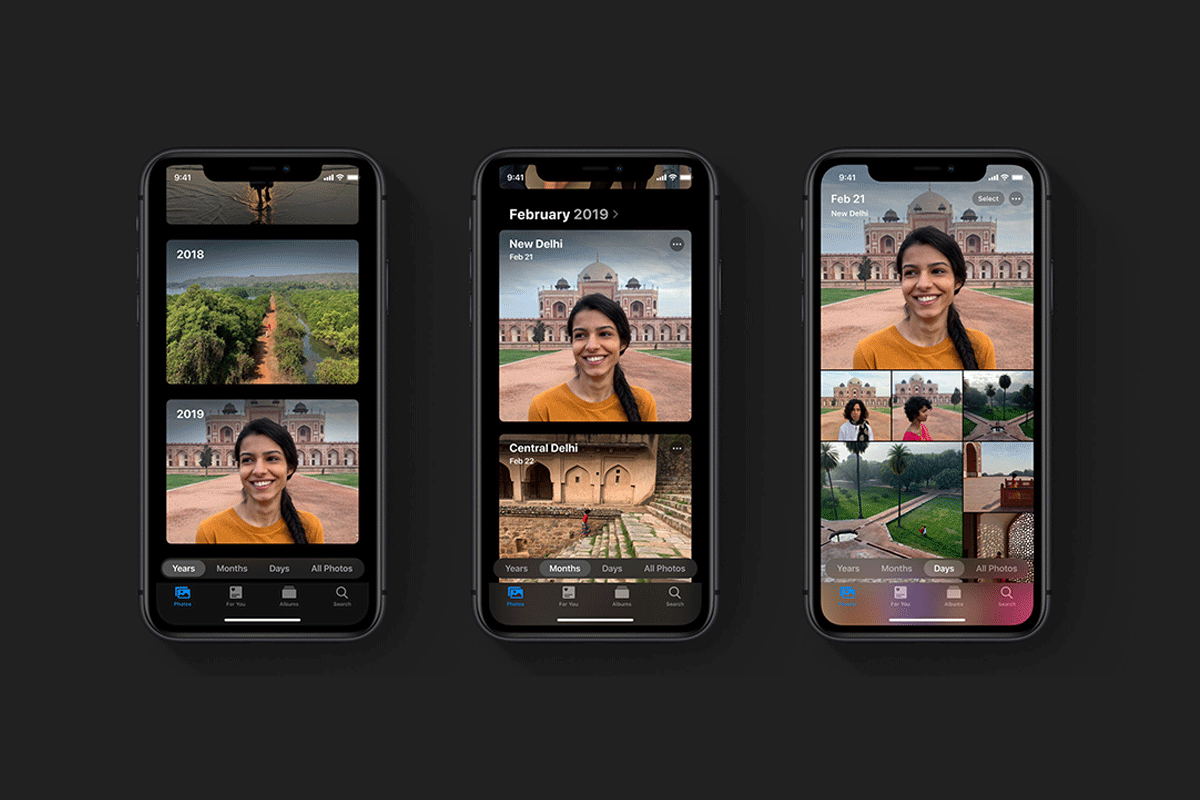 Apple’s OS updates are known for causing problems, but this time around there doesn’t seem to be as much risk involved with downloading the new operating system. As with anything technological, Apple will need to work out the performance kinks in the iOS 13. Sometimes it is better to wait a while before updating it. There are no huge leaps forward as far as performance goes, but the consistency that iOS 13 offers will help how your phone runs in relation to its OS.

While there aren’t many truly new features, there are updates to many of them. It can be a bit buggy at launch, but that’s the usual worry when it comes to updating iOS. The security of the system has been improved and it will lead to many improvements in the feature. It seems like Apple is trying to lay a foundation for what they think an operating system should offer in 2019. Smartphones dominate the market, and it is being reflected in their updates. As time goes on, Apple will likely build upon this foundation with new features and updates.

Now that you are aware of the new iOS 13 features, be sure to visit our website now to find the best accessories for your iPhone.

Will Electric Cars Ever Become Mainstream?