Following nearly 25 years after its initial release, Sony is bringing back its original PlayStation console in a miniature version, named the PlayStation Classic. The company is following in the footsteps of Nintendo, after their success in launching the Nintendo miniature NES Classic and SNES Classic consoles back in 2016.  In spite of huge developments in the technology for video-games, retro gaming remains to be popular with fans. This has been proven with the Nintendo Mini models, which sold out almost immediately and were overtaking most modern gaming consoles like the PlayStation 4 and Nintendo Switch.

Alongside the announcement of the miniature gaming device, Sony confirmed that the console will come with 20 pre-loaded games. In addition to a this, customers of the Mini-PlayStation will get two classic original style PS1 controllers to use on multiplayer games. Carry on reading to discover more about the features of the console, what games will be available, and how to purchase it.

Very similar to Nintendo’s mini gaming consoles, Sony’s PlayStation Classic will be roughly half the size of the original device. To be precise, the gaming device is actually small enough to be held in only one hand. 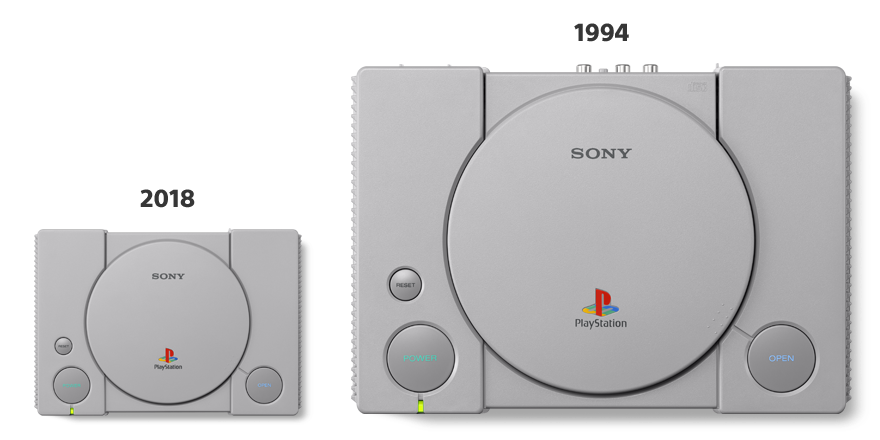 Sony’s PS Classic will connect via an HDMI cable to a TV. However, the device will not come with an AC adapter, and so you may need to think about purchasing one if your TV is lacking USB ports. Since the tray isn’t actually functional as it’s too small for original PS1 games, the console will already come pre-loaded with 20 different games. According to Sony, these “genre-defining” titles, will include Final Fantasy VII, Ridge Racer Type 4, Tekken 3, Jumping Flash and Wild Arms. The other games included in the 20 have not yet been confirmed, but the brand state that they will be “fan favourites”.

Similar to Nintendo’s retro consoles, it seems like users will not be able to download additional online games. Moreover, similar to the fake tray, the memory card slots are just on the device for decoration. However, players will be able to save their progress on games onto “virtual” memory cards.

The Sony gaming device will launch globally on December 3rd 2018. However, customers are currently able to pre-order the device at either Amazon or Game. As yet, the console hasn’t sold out, though it could perhaps sell fast if its anything like Nintendo’s NES Classic and SNES Classic Consoles.

Head to MyMemory now to get games and accessories that will take your gaming experience to the next level.

Why Samsung Galaxy S9 Is Better Than the iPhone X: Guest Post By Kenneth Evans