SDXC vs. SDHC vs. SD Card 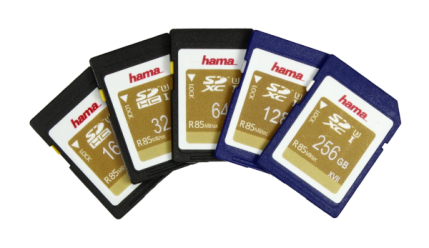 In addition to offering higher capacities, SDXC cards are also capable of faster data transfer speeds, with a maximum speed of 300MBps. In contrast, SDHC cards can achieve up to 10MBps. To help you find the right speed, SD/SDHC/SDXC cards are broken down into four classes: Class 2, Class 4, Class 6 and Class 10.

Class 2 cards offer a minimum sustained data rate of 2 megabytes per second (MBps), Class 4 of 4MBps, Class 6 of 6MBps and Class 10 of 10MBps. Depending on which manufacturer is selling the card, the speed class will either be prominently displayed or buried in the specs. Either way, you should keep an eye out for it.

One question around any new card format is whether it will work in older devices, or whether newer devices will accept older card formats like SDHC and SD. To answer the first question, an SDXC card may work in an older device that doesn’t specifically support it, but you won’t enjoy the larger capacities or faster speeds. Most cameras and camcorders introduced in 2011 support SDXC. Support is more limited in cameras and camcorders introduced in 2010. If a camera takes an SDXC card it will always work with SDHC and SD cards.

What are Powerline Adapters?