Along with the reveal of Galaxy S7 and S7 Edge, Samsung had another important announcement at the Mobile World Congress in Barcelona. The company introduced the Gear 360, a 360-degree video camera aimed at regular consumers rather than professionals.

The device is a little sphere with a flat bottom, which can rest on most surfaces or on its own small tripod. The camera is a bit smaller than a tennis ball and weighs only 153 grams. It features two f/2.0 fisheye lenses, each with a 15-megapixel sensor and Samsung says it will capture 3,840 x 1,920 video at 30 frames per second (near 4K) and 30-megapixels images. A small display at the top of the camera will let you know what video mode you’re currently shooting, including time lapse, video looping, photo, and video. The device has a pair of microphones, which will record audio in stereo and a rechargeable battery which should allow up to 140 minutes of active use. There’s no onboard storage, but Gear 360 supports MicroSD cards up to 128GB in capacity. 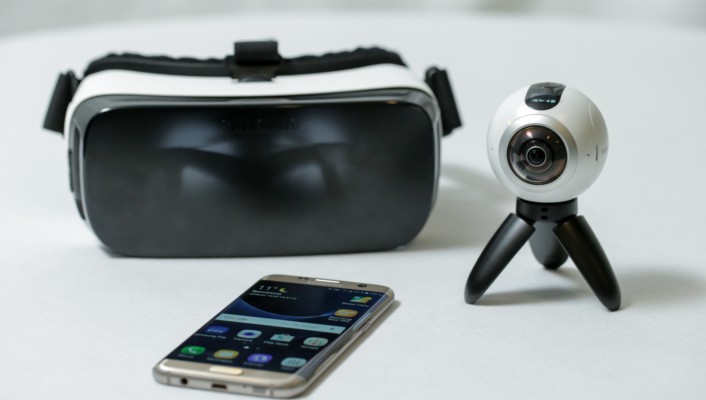 The Gear 360 follows Samsung’s belief that the smartphone in your pocket should be the center of your VR world. The new Galaxy S7 and S7 Edge are currently the only smartphones that integrate with this camera. Because of the powerful Snapdragon 820 processor, the new phones will allow you to preview in real time the footage on your screen. You will be able to save the footage to your phone over WiFi for 2D viewing on the mobile app or true 360-degree viewing through Gear VR. You can also choose to share content directly to 360 video-compatible services like YouTube or Facebook. The Galaxy S7 can also shrink the video down to a more share-friendly size and act as the camera’s remote.

The Gear 360 camera, Gear VR headset and Galaxy S7 phones now represent Samsung’s Virtual Reality ecosystem. The company is providing a device for creating VR content, another one for viewing/interacting with it and a third that is essential for the others functionality. There are high chances that you’ll purchase all three devices if you’ve already set your eyes on one of them. Samsung is giving away a free Gear VR headset to the customers that will preorder the S7 smartphones until 18th of March. So buying the Gear 360 camera might come as an easy decision for most of the S7’s early adopters.

Samsung did not specify the exact release date of the Gear 360, only that it will be available in select countries in the second quarter of this year.

Soon, possibly most of us will own a 360-degree camera and we’ll record our memories and review them later through a virtual reality headset. MyMemory offers fast and affordable 360 video camera memory from the world’s leading brands. So you can visit our website to find the best Micro SD card compatible with your 360-degree camera.