DJI’s drones are lightweight and relatively easy to use. Newer models come with built-in GPS and a motorised mount that stabilises the camera while letting it rotate in several directions. Considering the technology embedded inside, they are actually deemed inexpensive, however, that’s relative, the new Phantom 4 Pro is available now for £1589 and a Phantom 4 Pro+ bundle is available for £1819.

The name gives away that this new Pro model is based on the Phantom 4, and much like anything else “pro”, features a few notable upgrades as well some new flying modes.

So how exactly does this compare to its predecessor? For starters it has an uprated camera that is equipped with a 1-inch, 20-megapixel sensor capable of shooting 4K/60fps video and Burst Mode stills at 14 fps.

The adoption of titanium alloy and magnesium alloy construction increases the rigidity of the airframe and reduces weight, making the Phantom 4 Pro similar in weight to the Phantom 4. 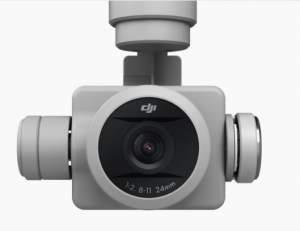 The on-board camera has been redesigned to use a 1-inch 20-megapixel CMOS sensor. A custom engineered lens made up of eight elements is arranged in seven groups, it is the first DJI camera to use a mechanical shutter, eliminating rolling shutter distortion which can occur when taking images of fast moving subjects or when flying at high speed. In effect, it is as powerful as many traditional ground cameras. Advanced sensors and processors ensure everything is captured with more image detail and the image data needed for advanced post-production, making it the most powerful Phantom camera ever.

It has a host of other impressive specifications, such as an enhanced video processing system that allows video to be captured in cinema and production optimised DCI 4K/60 (4096 x 2160/60fps) at a bitrate of 100Mbps, enabling you to get high-resolution slow motion shots.

The sensors on the Phantom 4 Pro has also gotten a big upgrade. The previous model had obstacle avoidance, but it only worked when you were flying forward. The Phantom 4 Pro now has sensors on all four sides, meaning the drone can see and avoid obstacles while moving in any direction. The ‘FlightAutonomy’ mode is expanded with an additional set of high-resolution stereo vision sensors placed at the rear in addition to the pair placed at the front as well as infrared sensing systems placed on the left and right sides. This allows you to follow a subject autonomously while flying backwards or sideways.

Another big change with the Phantom 4 Pro is that you can buy a remote with a built-in display (it comes included in the Pro+ edition). The new remote is much brighter than most smartphones, and offers the perk of allowing you to fly without burning the battery on your device. Let’s take a look at some of the specifics… 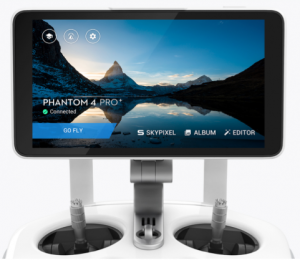 The Phantom 4 Pro controller integrates an upgraded Lightbridge HD video transmission system that adds 5.8 GHz transmission support, in addition to the 2.4GHz frequency band. With this feature, common interference problems could be eliminated.

A 5.5in 1080p screen integrated with the Phantom 4 Pro+ offers twice the amount of brightness as conventional smart devices. It makes bright, vivid colours easily visible in direct sunlight. With this screen, a mobile device is not required, simplifying pre-flight preparations. Integration of an HDMI port, Micro SD card slot, microphone, embedded loudspeaker, and Wi-Fi connection allow images to be edited inside DJI GO to be shared almost instantly.

So is it worth it?

The Phantom 4 Pro has longer flight times than its previous models at 30 minutes, compared to the Phantom 4’s 28, and can fly at up to 31mph in Profile mode, which is used to avoid obstacles, or up to 45mph in sport mode! It also has the ability to automatically recognise subjects, follows and captures them as they move, making it easier to get complex shots.

Following fast-moving objects can be very challenging, but advanced image recognition algorithms used by the Phantom 4 Pro allow it to recognise and track the object while keeping it in frame. This new algorithm also recognises more subjects, from people to vehicles to even animals, and will adjust its flight dynamics to match, ensuring smoother shots every time. Lastly, a five-hour battery life makes the Phantom 4 Pro + a complete aerial imaging solution.

This truly is a magnificent piece of tech. Being essentially a complete upgrade of the original Phantom 4, The Phantom Pro 4 hosts a bunch of exciting new features that is well worth the £1,600 price tag. This is an eye watering £400 more than the original, but with a new lease of life and a load of fresh new tech specs, including 4K recording, an upgraded ‘Return to home’ feature that allows the Phantom Pro 4 to automatically choose its best route home dependent on environmental conditions and even a ‘Gesture Mode’ that allows the drone to capture selfies easily using a few gestures without the use of the remote controller, it’s truly worth it.

If it wasn’t already, The Phantom 4 Pro has marked DJI on the map at being one of the best, if not THE best consumer drone manufacturers on the market. Sure the prices may look a little hefty, but when you dig deeper and take a detailed view at the specifications and the sheer intelligence that these ‘minicopters’ house, you may actually find that you’re bagging yourself a bargain.

FOR A FULL VIEW OF SPECS AND ADDITIONAL FEATURES THE PHANTOM PRO 4 HAS TO OFFER, CLICK HERE.

Use our Memory Selector to find the best memory cards for your DJI drone.