As Solid State Drives (SSDs) are becoming more prevalent in most consumer PCs and laptops, more people are taking an interest in understanding how this new drive works and how it can help them speed up their device.

In a previous article, we explained what a Solid State Drive is and how it is different from a traditional Hard Disk Drive, but there is plenty more to know about SSDs if you’re looking for an upgrade.

The SSD market has diversified and grown a lot in recent years. Even though the consumer-grade SSDs are (as of 2016) still roughly four times more expensive per unit of storage than consumer grade HDDs, their prices are starting to decline now at a faster rate than ever. Therefore, in this article, we aim to provide you more information about different types of Solid State Drives, that will hopefully help you in choosing the right one for your device.

Let’s start at the very beginning with a short recap. The SSD is a data storage device similar to HDD but with superior functionality. An SSD can significantly speed up your computer in several ways: reduce boot times, launch applications in a near-instant, eliminate lag when saving and opening documents and generally improve the functionality of the whole system.

There are three main criteria by which SDDs differ: form factor, interface connector, and bus protocol. These notions are interrelated, and generally one implies the other two, but for the purpose of clarity, we’ll look at what each of them means.

The term ”form factor” is used in the computer industry to describe the shape and size of computer components. When Solid State Drives first started replacing HDDs, they had to fit into computer chassis or laptop drive bays built for HDDs, so they had to conform to HDD dimensions. However, now, there is no requirement for the SSD to match the shape of a typical HDD form factor. The largest component of an SSD is a flash memory chip so, depending on how many flash chips are used, manufacturers have virtually limitless options in defining dimensions. One of the most popular form factors at the moment are the following: 2.5-inch SATA, mSATA, M.2 and PCIe add-in card. 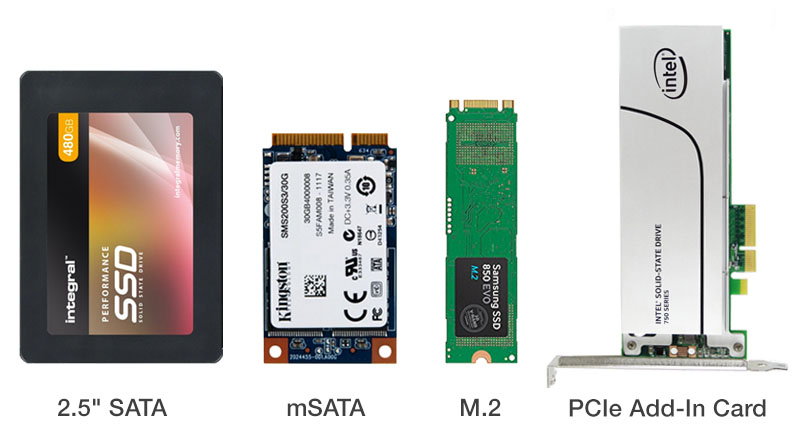 Secondly, the interface connector is the physical aspect of a communication system that transfers data between components inside a computer. In the early days of SSDs, that connector was typically the same SATA connector used with HDDs. This means anyone who currently has a typical 2.5-inch HDD in their system can swap it out for a 2.5-inch SSD. But even though a SATA interface SDD is a significant upgrade over an HDD, it has a limited transfer speed of only up to 600 MB/s (for SATA III).

Because the SSD technology is capable of much more, a higher form of interface connectivity was introduced. Well, technically, this new interface called PCIe (Peripheral Component Interconnect Express), was not specifically designed for SSDs since it was already in place. PCIe is the underlying data transport layer for graphics and other add-in cards, as well as Thunderbolt. Using this technology for SSD storage means faster speeds, as PCIe lanes are higher bandwidth. Each PCIe Gen 3 lane can move data at speeds up to 800 MB/s, so when an SSD says “PCIe 3.0 x4” it has a potential bandwidth of up to 3200 MB/s.

Finally, the last differentiating feature is the bus protocol or the software for accessing the SSD. Most SATA-based SSDs use the AHCI (Advanced Host Controller Interface) standard, which dates back to 2004 and was designed with hard drives in mind. As with the case of SATA, the AHCI protocol still works quite well, but it has certain limits and it can’t take full advantage of SSD’s potential.

This is why the industry had to develop a software interface that abolishes the limits of AHCI and takes advantage of the PCIe connector’s performance. The result of this is the Non-Volatile Memory Express (NVMe) protocol. By its design, NVMe allows modern SSDs to be utilised at full potential by the host hardware and software. As a result, NVMe reduces I/O overhead and brings various performance improvements in comparison to previous logical device interfaces, including multiple, long command queues, and reduced latency.

All these three features combined – form factor, interface connector, and bus protocol – result in different variations of SSDs. The 2.5-inch SATA and the mSATA are clearly using the SATA connector, as the name imply, with the older AHCI protocol. Even though the technology does not take full advantage of SSD’s capabilities, these devices will definitely improve your computer’s current performance. These also are one of the most common formats on the market, which means they have a reasonable price.

On the other hand, the M.2 format comes in more options. This SSD format can be manufactured to offer either traditional SATA or PCIe connectivity and it also can be designed to work with the AHCI or NVMe protocols. The popularity of M.2 SSD has increased significantly over the last two years. It has a smaller form factor and was originally designed for notebooks and ultrabooks, but eventually found its way into the desktop motherboard too. Although it comes in many variations, the connector you will see on M.2 drives is essentially the same. This is why you have to check the specifications in order to benefit more from your new drive.

But what SSD should you buy then? Well, the trick is in knowing what your system supports, what applications you normally use, and how much money are you willing to pay for this upgrade. 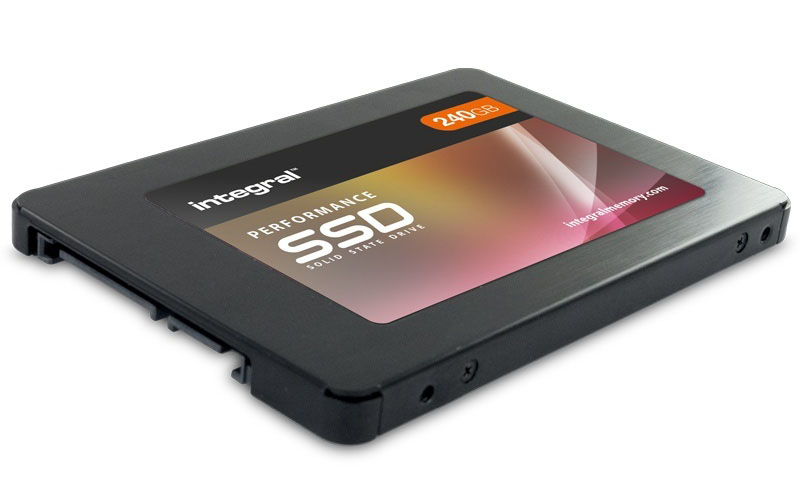 If you are currently using an HDD as the main storage device and you are unsure about your motherboard features, the best solution for you is buying a 2.5-inch SATA SSD. Even if your device does not support the latest version of SATA III, the SSD will be a significant improvement in terms of speed and general system performance (load time in a game with HDD – 1.5 minutes, with SSD – 20 seconds).

If you’re a technology enthusiast or you’re using your system more dynamically and more specifically for specialised applications, you should go for an M.2 with PCIe connectivity and NVMe protocol, or a PCIe add-in card (if you’re building a desktop computer). These drives will cost you more, but you will be certain that you have the latest and best technology in your machine.

If you’re somewhere in between, go for an M.2 format, but check what options do you have depending on the motherboard. Some do not support PCIe SSDs, so you will have to get a slower SATA M.2 SSD. Next, it’s just about getting the capacity what you can afford.

We hope this article was helpful in simplifying your understanding of the terms that usually surround the modern-day SSDs, and inform your decision over what technology is best for your needs.