GoPro’s lineup of Hero 7 cameras launched back in September 2018, helped the camera maker to successfully get back on top after a year of setbacks. A selection of new features, alongside competitive price points, gave GoPro just the lift they needed to make a comeback. However, 2019 saw the launch of DJI’s first action camera – giving GoPro real competition, with places like The Verge stating that DJI’s first action camera is almost as good as the best GoPro.

The DJI OSMO features a front-facing screen, dedicated in-camera slow-motion mode, slightly more waterproof casing, and is priced a little cheaper than the Hero 7 Black. With this in mind, we are anticipating an innovative, powerful next lineup from GoPro to keep themselves in the running for the title of the best action camera.

So, will there be a GoPro Hero 8? If so, what can we expect? From an anticipated release date and leaked images to new features and improvements, discover everything we know about the GoPro Hero 8 so far.

What we can expect:

As of yet, there haven’t been many leaks in terms of prototypes for the design of the Hero 8. But we’re likely to see the next flagship to have a new GP2 processor, and improvements to the video frame rates, not to mention a possible 4K at 120fps. Though not long ago, Photo Rumours unearthed leaked images of the proposed upcoming GoPro, scroll further down to see these photos.

With the DJI Osmo Action featuring a front-facing screen, GoPro is now under the spotlight to come back with their own front-facing feature. However, whether the company responds to this is another question. Speculations online are forecasting a more likely upgrade of an edge-to-edge rear screen or external display rather than GoPro making any radical adjustments to its already well-known design. 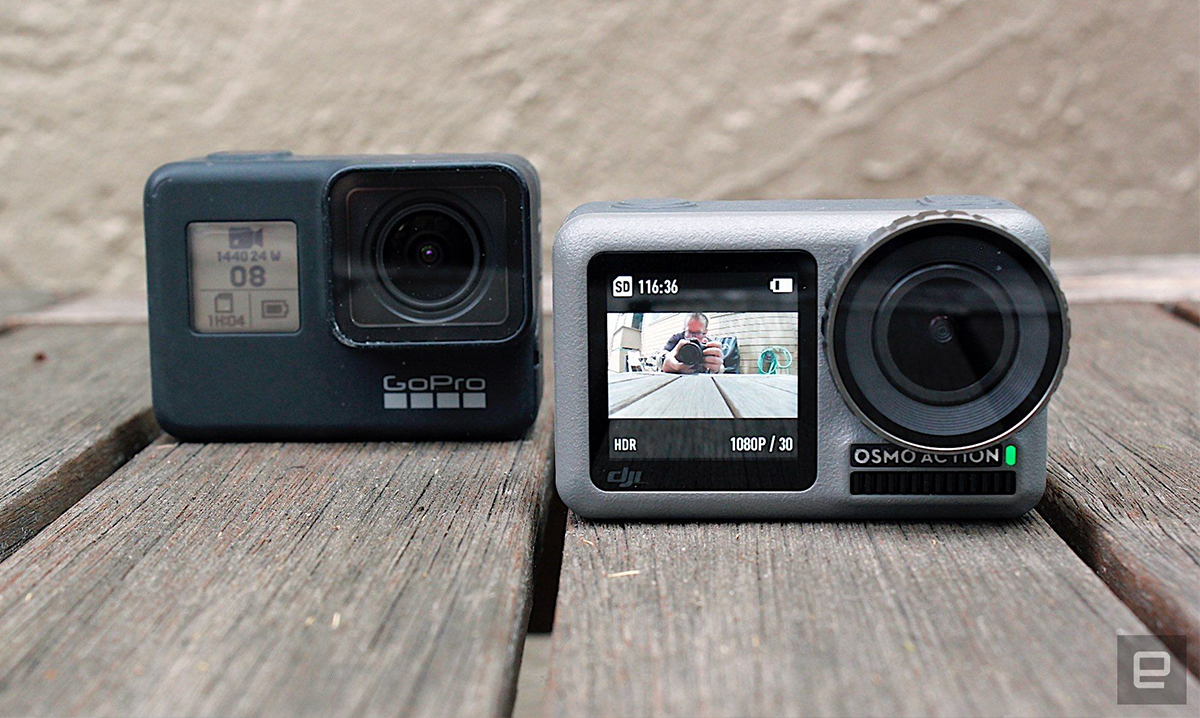 Just recently, photography news site Photo Rumours exhibited images of what appears to be the upcoming GoPro Hero 8. Although blurry, the renders clearly show a figure of 8 on the side of the camera, with distinct physical upgrades. The images imply that the Hero 8 will house new accessories, inclusive of a microphone, external LED light and an external display screen. 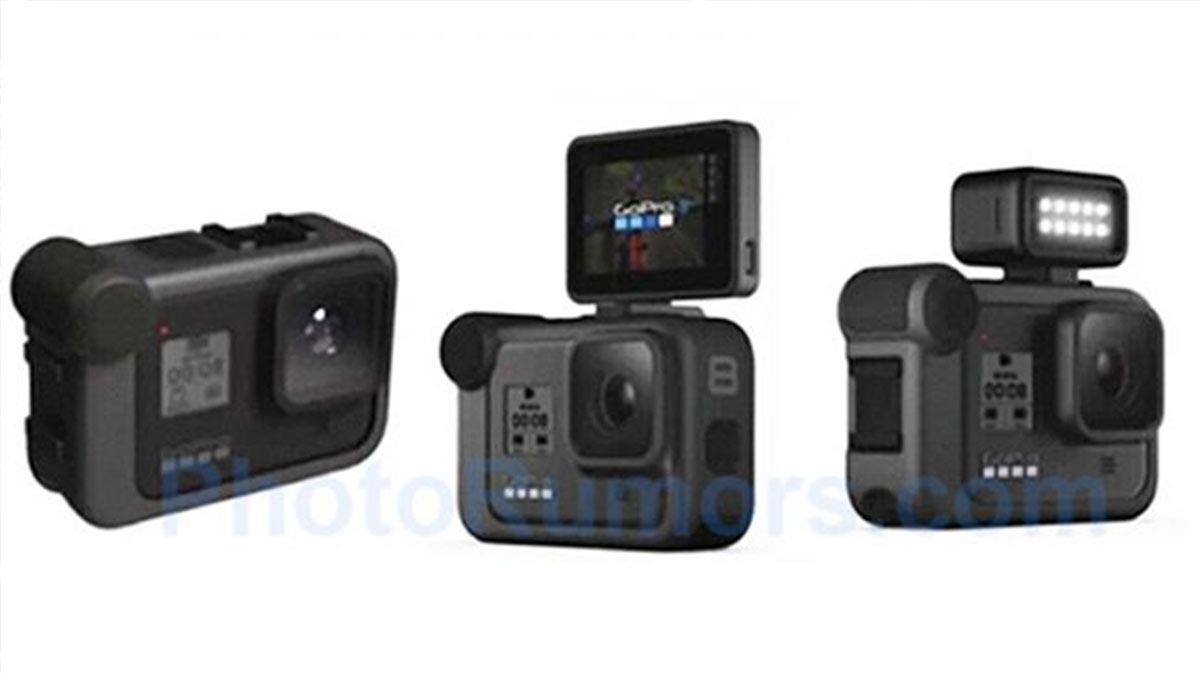 Unfortunately, there isn’t a definite confirmation as to whether we can expect GoPro to add major improvements for all the Hero 8 variants. If previous years are anything to go by, we are assuming the flagship Hero 8 Black will see the biggest upgrade in terms of new specs, compared to the lower and mid-tier models. Further rumours speculate that the upcoming camera will feature video+ photo capture capability, a component that was removed from GoPro models with the introduction of the GoPro Hero 6 Black.

It’s important to note that nothing has officially been confirmed by GoPro and so we will all have to wait until it’s release to see what will feature on the tech giants next action camera.

What we can expect to see, however, is a completely new Hero 8 lineup and not just a refresh of the flagship. GoPro’s CEO, Nick Woodman, was quoted confirming this in the company’s Q1 earnings call in May 2019:

I’m happy to share that we’re planning an exciting refreshed lineup at all price points in Q4.”

Also confirmed by Woodman during GoPro’s Q1 earnings call was the confirmation of a refreshed Fusion 2: “I’m happy to share that we’re planning an exciting refreshed lineup at all price points in Q4, including our next-generation spherical camera.” 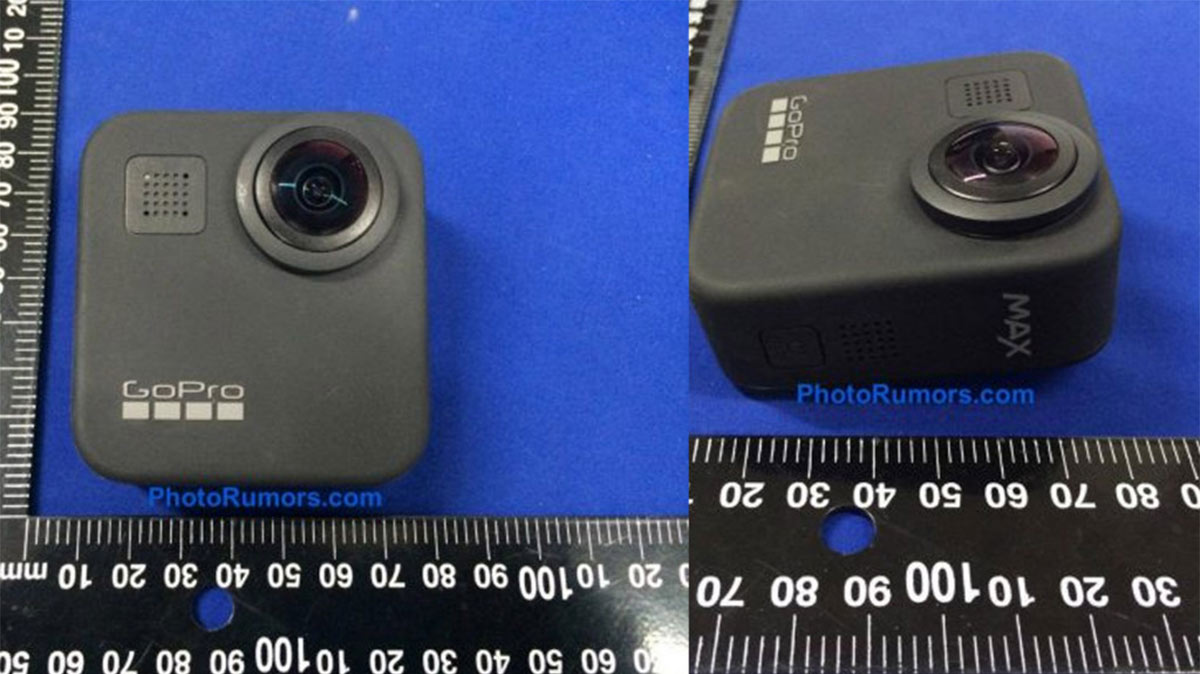 Within the series of leaked photographs from Photo Rumours, was the GoPro Max 360. It has now been almost 2 years since the first Fusion was released, with many users stating that the camera is overdue a refresh as the design is now felt to be bulky. However, the option of dual-memory card support is something we are still hoping to see on the upgraded device. This could possibly mean that we will be seeing a total of 4 new cameras from GoPro this year.

There are a few common requests we’ve seen online from GoPro fans for the Hero 8, which are inclusive of the support for external microphones over Bluetooth, some form of Hypersmooth stabilisation for HDR video, and the option of a 960fps slo-mo mode.

As for memory, the DJI Osmo Action and GoPro Hero 7 Black can take a microSD card up to 256GB in capacity, so we’re presuming the company will keep this the same for the new flagship. Nonetheless, if the storage capacity was increased, it would be a very welcome upgrade.

Although the GoPro Hero 8 release date is yet to be confirmed, basing assumptions on previous releases of its predecessors, we are expecting the Hero 8 to be announced sometime in September 2019.

As for price, it is still unclear as to where GoPro will position themselves. Though seeing as the DJI Osmo Action is priced £50 cheaper than the Hero 7 Black, it’ll be interesting to see how GoPro responds, perhaps positioning the Hero 8 Black at a similar price point.

There’s a lot we don’t know about the upcoming GoPro’s, so it’s difficult to make any conclusions on what we are going to see on the cameras. However, if last years come back is anything to go by, we’re expecting GoPro to step up the mark with the Hero 8.

If there are any rumours you’ve heard that we’ve not mentioned or if there’s a particular feature you’d like to see on the Hero 8, please feel free to leave us a comment below.

Why Do I Need a Clever Dog in My Life?