Ever wondered what your favourite Game of Thrones characters would be like if they had mobile phones?

With the much anticipated season 8 on the horizon, we thought we’d have a bit of fun and find out. Which character is most likely to be an Insta-famous influencer? Who would be snapchatting their way across the seven kingdoms? Would any of them use LinkedIn? Here’s what we think; see if you agree!

We reckon Bran Stark would be that guy who posts whimsical, cryptic quotes as his Facebook status. In our minds, he’s travelling around Westeros on his gap year, sharing photos from his journey, which of course would be spiritual as well as physical. We’d probably find him a bit annoying on Facebook, but at the same time, we’d be living vicariously through his inspirational captions and adventurous travel snaps. 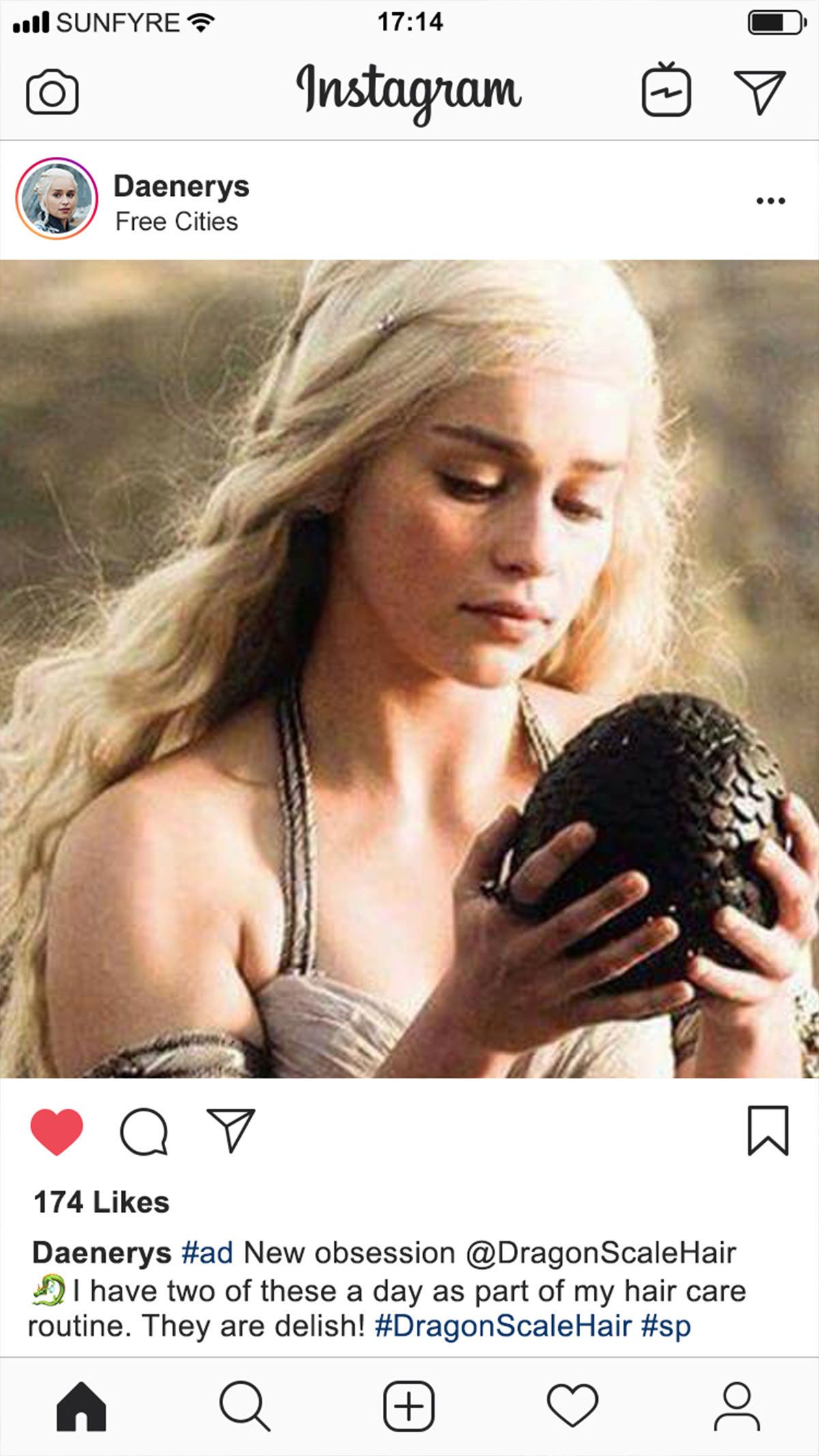 There’s no doubt about it, Daenerys would be an influencer. She’d post daily on her Instagram account, keeping the world up-to-date with everything from her travels around the Seven Kingdoms to how she cares for her dragons whilst on the move. We think she’d have a massive follower base, and wouldn’t shy away from a hashtag or twelve. After all, how else will she build a big enough following to take down Cersei Lannister and earn her place on the Iron Throne? 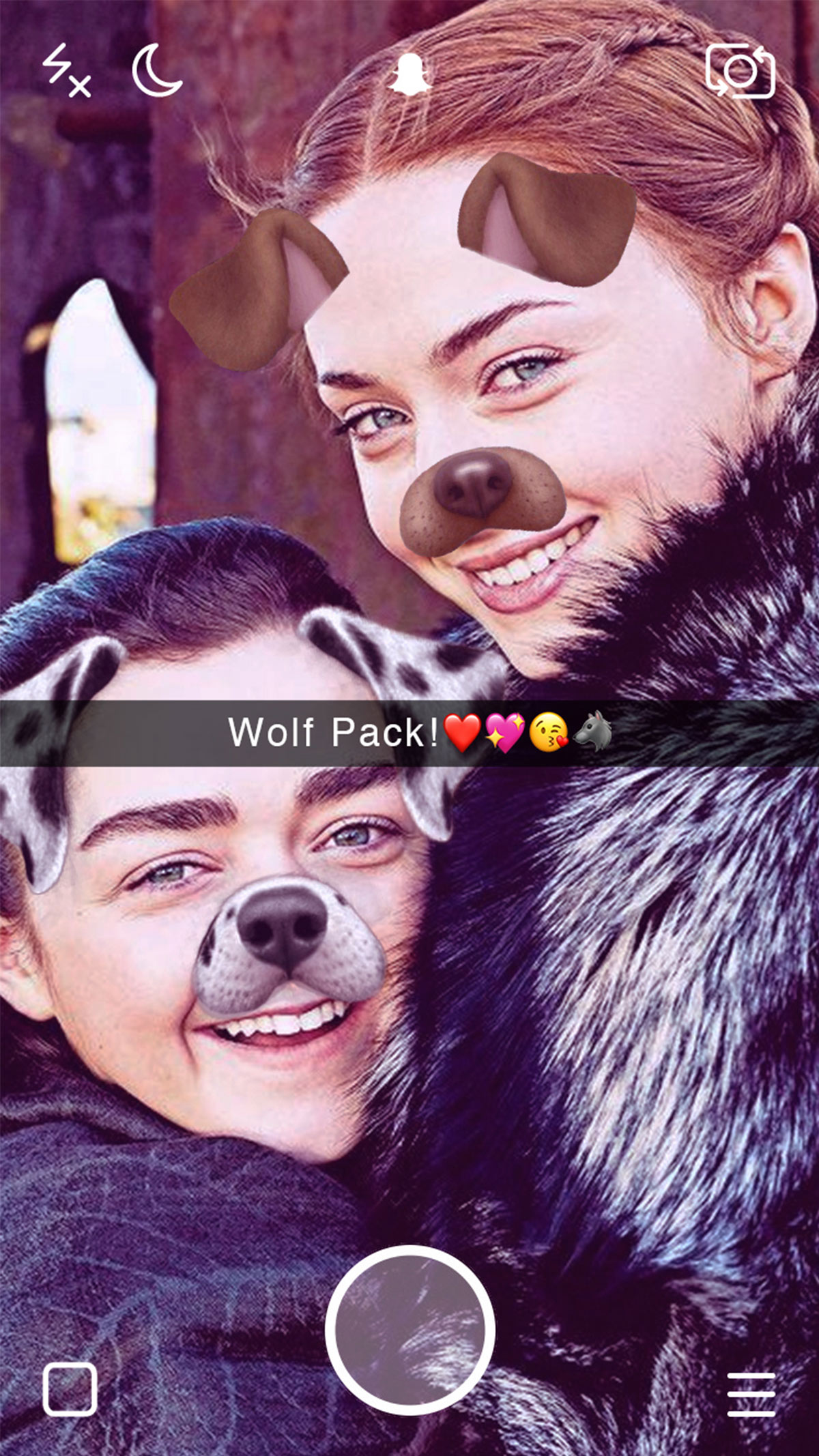 We’re all hanging on for that highly anticipated Stark reunion, but we reckon if Sansa and Arya did join forces again, they’d be giving us all #selfiegoals on Snapchat. Sure, all sisters have their spats, but after six years apart, we think the pair would be inseparable, leaving no filter unused when it comes to snapping pics together. 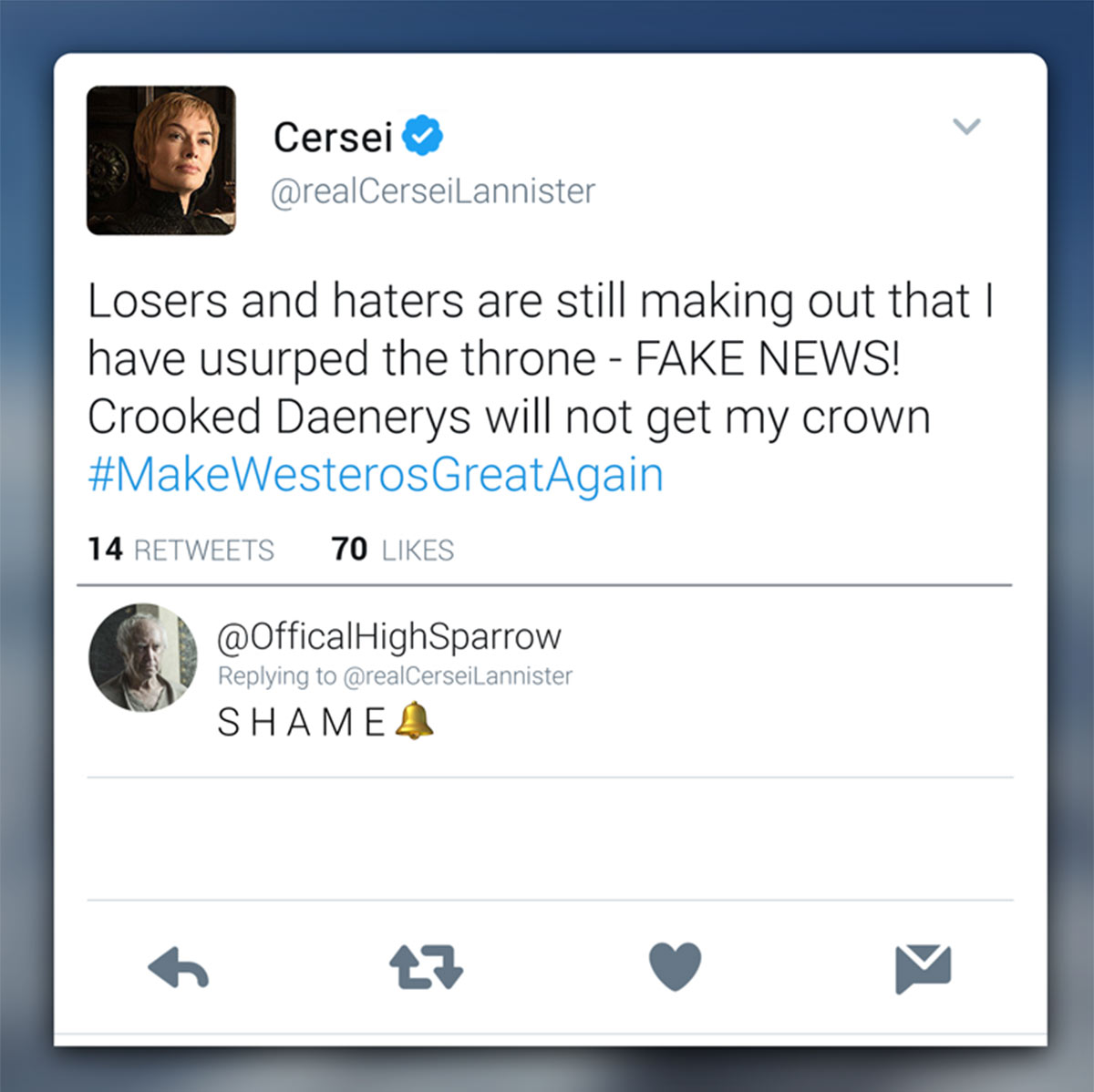 The power of wearing the crown would definitely have gone to Cersei’s head, and we think she’d be a very outspoken world leader, especially when it comes to expressing herself online. Not unlike certain other people of power on Twitter, we reckon Cersei’s tweets would border on the outrageous and spark debate among her followers. But that certainly wouldn’t stop her from speaking her mind, however unfiltered her comments may be! 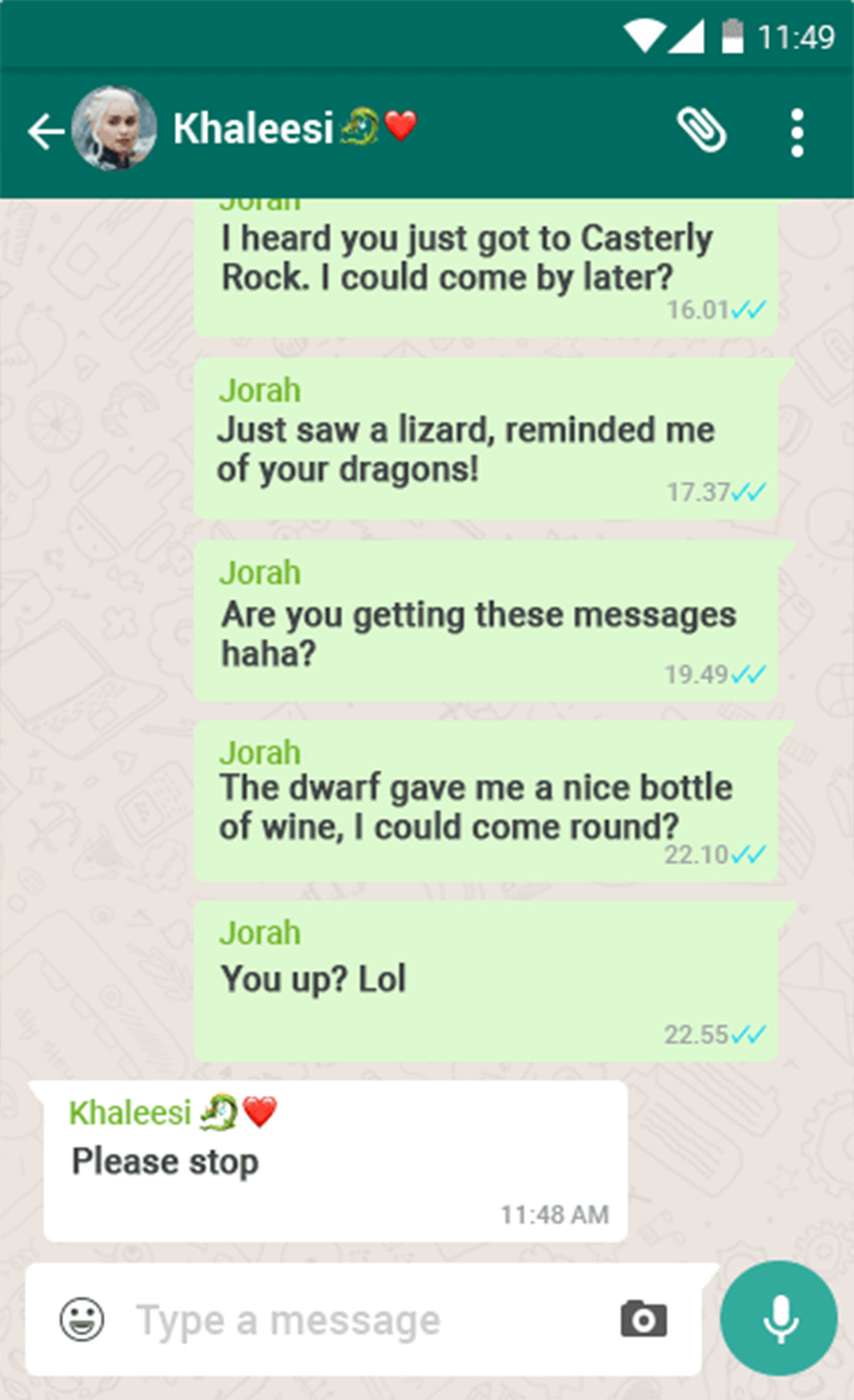 If Ser Jorah had a phone, he would totally be using WhatsApp to try to win the affections of his beloved Khaleesi, whose name he would adorn with heart emojis in his contact list. He’s almost certainly that guy who keeps trying when he doesn’t get a response, just in case Daenerys missed the first three messages. But sadly, as her most trusted advisor, the best response he’s likely to get is the appearance of those brutal blue ticks. 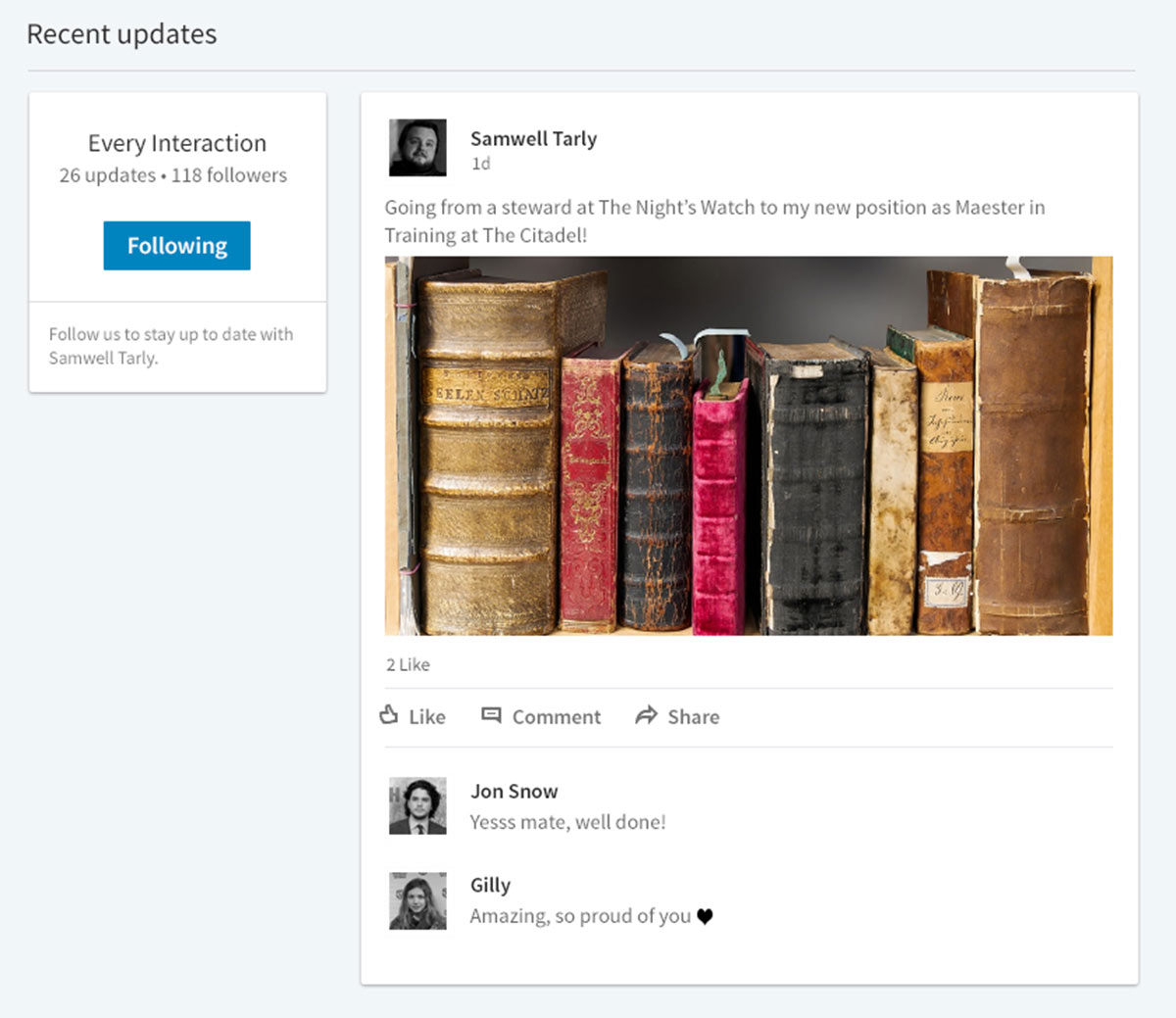 Sam would probably be keeping us in the loop about his progress in training as a Maester at the Citadel on LinkedIn. His mates would be cheering him on and congratulating him for getting on the right track after being in a job that probably wasn’t really ‘him’. We imagine he’d probably share a few interesting snippets of information he’d picked up at the Citadel library on there too. 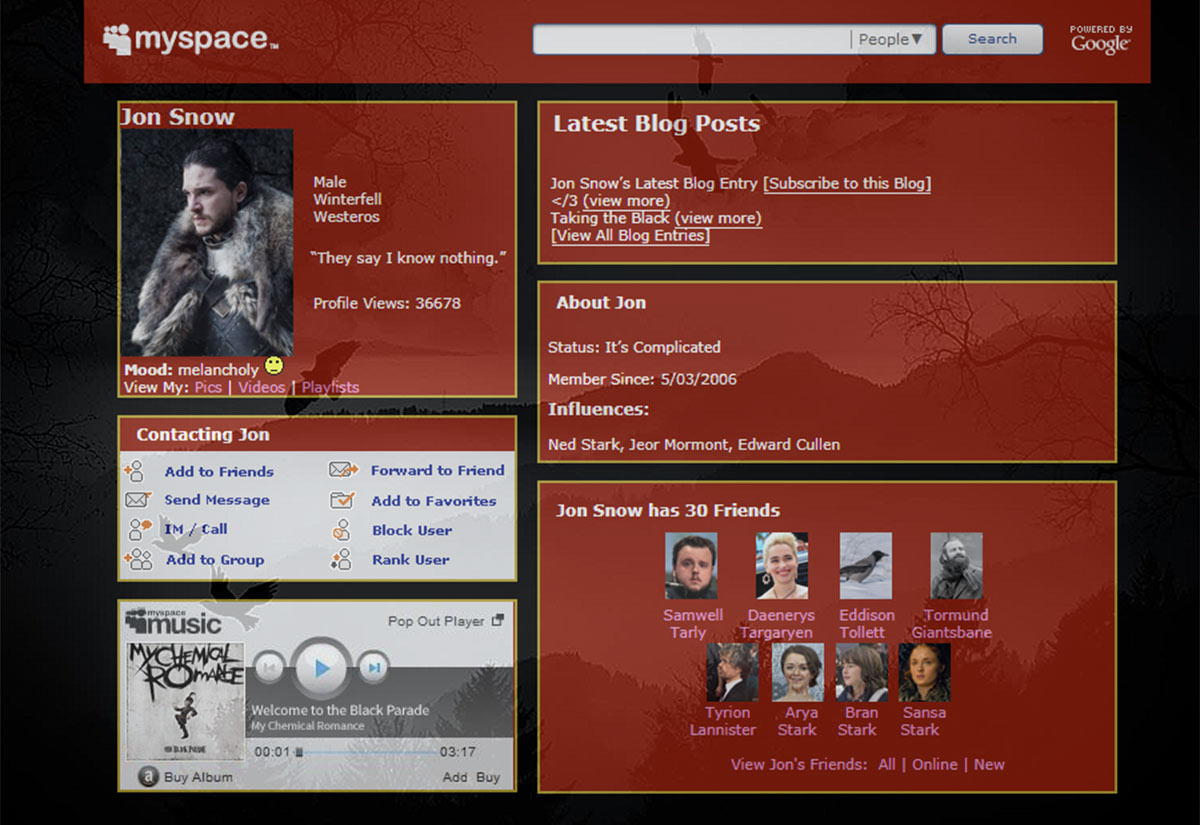 Jon Snow gives off a bit of an emo vibe with his long, dark hair and sulky expressions, and let’s face it, he’s uttered a few pretty bleak one-liners over the past seven seasons. With that in mind, we think his favourite form of social media would be MySpace, circa 2006. In fact, he probably won’t even use a smartphone; he’d be a man of tradition and stick to desktop communications, possibly even on a dial-up modem. On his profile, we’d expect to see deep and meaningful blog posts, obscure lyrics from bands not many people have heard of, and lots of high-angled selfies.

Whether you’re an Instagrammer like Daenerys, glued to WhatsApp like Jorah or a tweetaholic like Cersei, make the most out of your mobile device with our range of mobile accessories.

Roget, S. 15 Game-Changing Details About The Targaryens Revealed In ‘Fire And Blood’. Ranker.com