Buying a computer used to be so much easier a few years ago. The decision-making process was still influenced by the same important specs like CPU, RAM or GPU, but when it came to storage space, there was only one main characteristic – the number of gigabytes (GB). Not many were interested in how the storage component of a computer works, as long as they could afford the one with the highest capacity and speed.

HDD and SSD: What’s the difference?

Now, if you’re looking to upgrade a computer or buy a new laptop, you need to know the difference between a Solid State Drive (SSD) and Hard Disk Drive (HDD), in order to choose the right storage component. Although the standard for all the ultraportable laptops is the solid state drive, every other desktop computer or laptop can be configured with either an HDD or SSD. Therefore, we think it’s still relevant and important for you to know how both types of drives operate, so next time you’re faced with this decision, you’ll choose the best drive according to your needs. 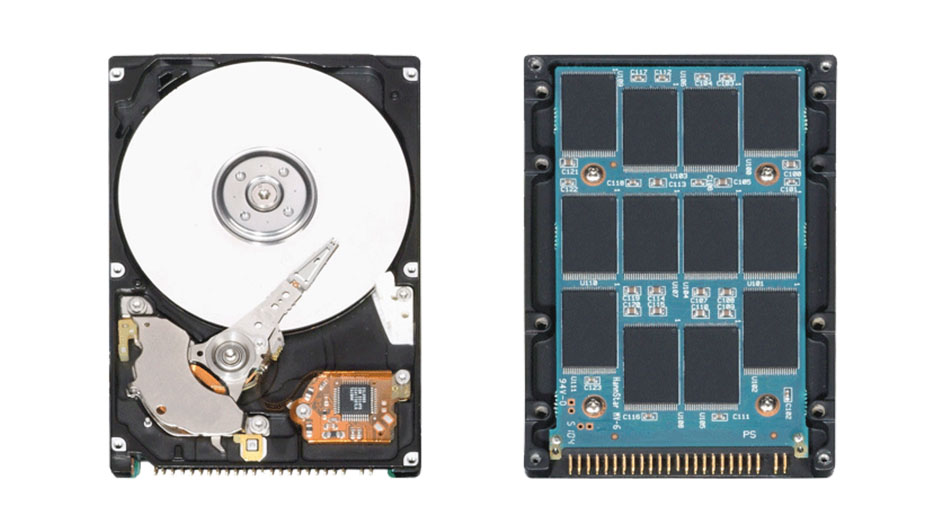 Both hard drives and solid state drives are data storage devices, utilising what is known as non-volatile memory (NVM). NVM is essentially long-term data storage, the information is retained even if you turn off your system. While both HDDs and SSDs serve the same purpose, the mechanisms by which they read, write, and store data are different, and each comes with its own advantages and disadvantages.

The standard hard drive contains multiple disks called platters, which are covered in a magnetic coating and rotated at high speed. Information is written to and read from the drive by changing the magnetic fields on those spinning platters. This method of storing data allows the hard drives to be inherently more capacious (up to 8TB at the moment).

HDDs have been around since 1956 and because of this, hard disk drives are much cheaper per gigabyte than solid state drives. HDD manufacturers continue to improve storage capacity while keeping costs low, so this device remains the first choice for anyone looking for a lot of storage without spending a lot of money.

But while the low price and high capacity represent the HDD’s benefits, this drive has also some clear downsides. Because the hard drive uses magnetism to store data on a rotating platter, reading from or writing to the disk works much faster when data is stored continuously on it. Over time, when a hard drive starts to fill up, large files will be stored on different parts of the disk, causing it to suffer from what’s called fragmentation.

Also, all the moving parts of an HDD increase its risk of mechanical failure. The rapid motion of the platters and heads inside the hard drive make it susceptible to electronic and sudden power failures, physical shock, and corrosion among other things. The HDD uses more electricity to rotate the platters, generating heat and noise. It also requires more time to speed up to operating specs, and will still be slower than an SSD during normal use.

The solid state drive has a much shorter history than the hard drive. The key difference between these drives is the fact that there are no moving parts inside an SSD. Instead, the SSD uses flash memory, which is created by an array of semiconductors joined using integrated circuits. Because new data doesn’t need to be physically written to the disk, the flash memory involved in SDD is far quicker to read and write than in HDD. A computer with an SSD boots-up much faster, as well as launches and runs apps faster as well as transferring files.

Furthermore, SSD’s reliability is much higher. No moving parts mean your data will more likely be safe in case you drop your laptop. The solid state drive has also very low power consumption, especially when idle or reading data. The drive creates almost no noise, is less susceptible to overheating and not affected by strong magnetism.

Based on these features, the first reaction would obviously be choosing the SSD over the HDD, but unfortunately, the advantages come at a price, literally. As the technology is still relatively new, the cost per gigabyte of storage is much higher than HDD. For similar amounts of storage, one would likely end up paying nearly twice as much for an SSD than an HDD.

Also, just like hard drives, SSD’s can wear out over time, but for different reasons. Although there are no moving parts inside an SSD, each memory bank has a finite life expectancy – a limit on the number of times it can be written to and read from before it stops working. However, the logic built into the drive tries to dynamically manage these operations to minimise problems and extend its life as much as possible.

Which one is right for you?

It’s unclear whether SSD’s will totally replace the hard drives in the future. Their price is coming down, but they’re still too expensive to totally replace all the terabytes of data some users have. For now, if you need a lot of storage capacity and don’t mind the slower speeds, the HDD is the best choice. But if you really care about faster performance, don’t mind investing some extra money and looking for alternatives to extend the storage capacity if needed, then the SDD will be the right choice.

Now you know the difference between the two, be sure to head to our website now to view the best data storage solutions.

What’s in Your Bag – Richard Wainwright