Leading workshops gives you an interesting insight into the hopes and aspirations of photographers. I always “interview” applicants for my “FirstLight Workshops,” in which I hope to clarify if we’re good for them and vice versa. One question I always ask is about photographing people, and the response often contains one or all of the following:

4. I prefer landscape/wildlife/fill in the blank

What I often find, after a short discussion, is this individual would love to be able to photograph people—and do it well. It’s an important thing to master, but it can be an intimidating process at first.

In my work I also photograph wildlife, landscape, sports, macro, just about everything. I am a generalist. And I really love the diversity of subject. It keeps me interested; it’s challenging and never the same. But, people are a constant in my work, as it should be in yours! 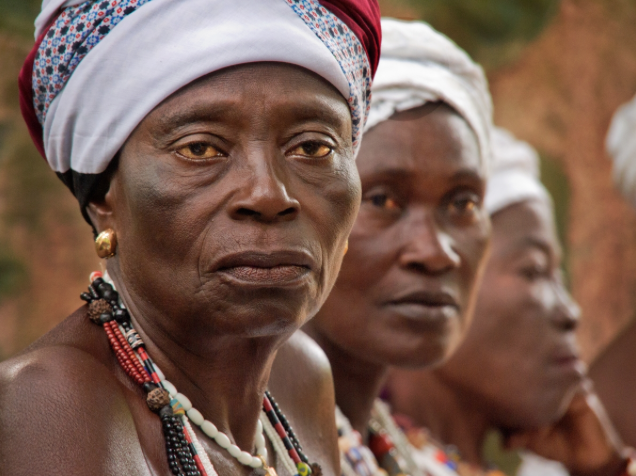 As a photojournalist, I regularly approach individuals who are doing something that I find visually interesting. If it’s something that is happening “of the moment,” I may photograph the moment, then approach the people in the photo. Or, if someone is doing something great, I will approach and ask permission. Either way, I’ve found that my success rate in obtaining permission is around 80-90% or more. I’ll give you a few suggestions on the process, from approaching to asking permission, to working the situation.

One of the first lessons in this: make sure you know your equipment well. When you get permission to photograph someone, your subject needs to feel that you are visually knowledgeable and technically proficient as to not waste their time. Once the camera goes on over your neck you should be ready. Camera mode is in the appropriate setting, ISO is set, hopefully you are shooting RAW so setting white balance isn’t really an issue, and you are “thinking and seeing photographically.” Your subject has to feel that you know what you are doing, or that confidence is lost in the relationship.

So, how about that permission thing? I’ve found that eye contact can provide a lot of info: is that person receptive and do they seem friendly? Learning to read some basic body language goes a long way, and there is also the element of safety here. There are times where you’ll get a negative vibe, and it may be best to follow your intuitions not to pursue someone. Also, be aware of not carrying too much gear when out on the streets. Not only can that be intrusive and obnoxious, but you may set yourself up to be the target of theft. So, be on your toes.

When I do see someone doing something that is visually appealing, I’ll watch for a bit, then decide when it’s appropriate to approach. A simple trick of making eye contact and smiling goes a long way here, plus it may provide that important feedback as to whether you are welcome or not. Now, the work begins. 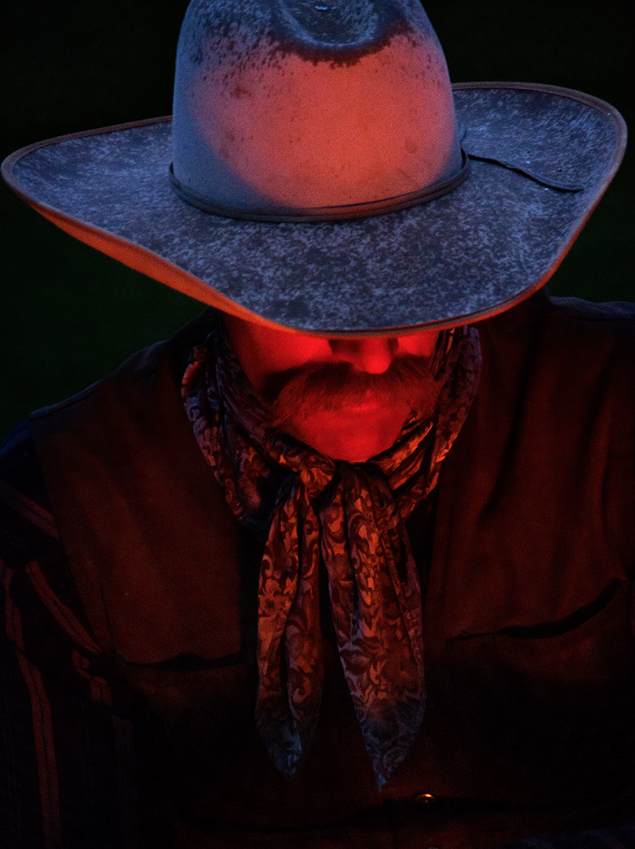 Eyes are one of the most critical components of a portrait. I intentionally waited until his eyes were obscured by the brim of his cowboy hat so the photo is about the generic cowboy, not the individual.
Technical Information: Olympus EM-5, 14-150mm f5.6, 1/3rd second, f5.6 1600 ISO, Lexar Professional 400x SD card

What often happens to the aspiring photographer in a situation like this: you get the nerve to approach that person, and you communicate your interest in taking their photo. Your nervous system is running at 110%, but they give you permission—yet they’ll often stop doing what was so interesting to you, instead turning to you and indicating that they’re ready to be photographed. You are so freaked out over this process that you grab two or three quick frames, nothing like what you were hoping for, and you sprint for the exit.

Now, here’s a better take: you get the nerve, you get permission, and the person turns to you to be photographed. What I do is stare right back at them, not bringing my camera up, and ask them to go back doing what they were doing. This “stand-off” may last a few seconds, but they’ll usually recommence what they were doing. I have my camera ready so I’m not fumbling with the equipment and draining confidence from my intended subject. Even if I’m not sure what I’m trying to capture, I’ll start shooting, just to get the process moving. And be keenly aware of when you’ve overstayed your welcome.

You can call this part of the process paying it forward, karma, whatever, but be sure to send them images. An email with an electronic file can be greatly appreciated (I’m amazed that so many people worldwide have email addresses.) In a small village in Tanzania, I was photographing a beautiful young Maasai princess who lived in a small Inkajijik (the Maasai word for a house) home, which is loaf-shaped and made of mud, sticks, grass, cow dung and cow urine. No signs of internet here! Asking at the end of the session if I could send her photos, she popped up with an email address. Always ask, or ask if they have a friend who has email. 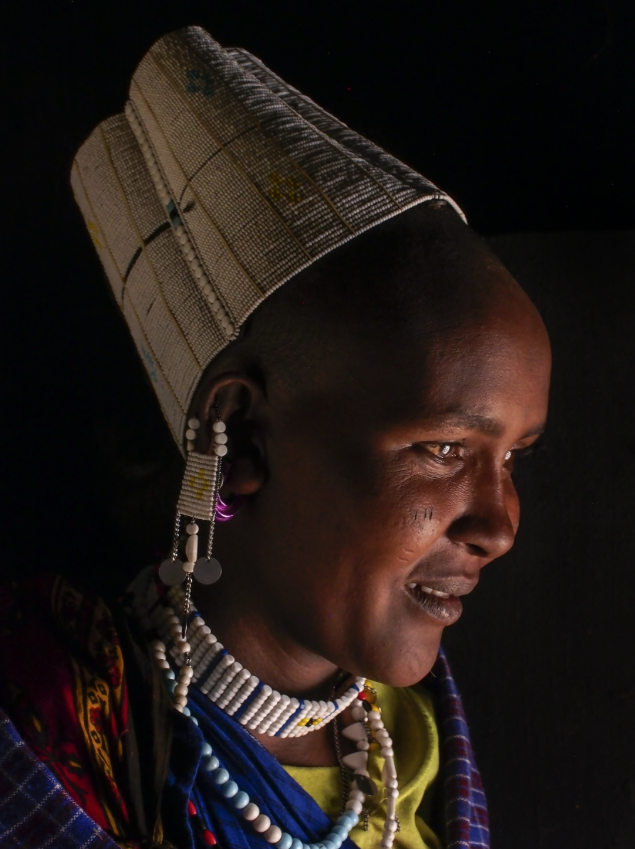 Maasai princess, African village. The overhang of a hut provided open shade and a very dark background. I had someone hold a reflector to “bounce” a bit of light on the back of the hat to make it more of a component.
Technical Information: Olympus E-M5, 75mm f1.8 1/60th second @ f1.8, 200 ISO, Lexar Professional 600x SD card

I think the onus falls upon you, the photographer, to do your utmost to capture the essence of that person, who they are, and what they’re doing. Manage the situation, watch the light, and work the moment, which is one of the most critical components of this process. That moment can be big and loud, such as a big laugh in reaction to something said, or a small and quiet moment of that person’s eyes lifting to meet the gaze of a friend. Moment drives everything in this process. Henri Cartier Bresson said that every situation in life has a decisive moment and it’s the job of the photographer to capture that moment.

Also, don’t hesitate to give your subject some direction. This can further emphasise your involvement with that subject, as well as letting them know that you are photographically “connected” to the scene. Perhaps it’s a cobbler in India, and by moving that person a few inches one way or another, you take care of that ugly light coming in the door in the background.

Essentially, two kinds of portraits are available: standard portraits and environmental. Standard portraits allow the face to fill most of the frame. These are wonderful when you have facial features (eyes, wrinkles, great noses, etc.) that may drive the visual interest. Environmental portraits include background information that tells the audience something about that subject, such as a train conductor in the foreground with the train filling two-thirds of the frame. I photographed a gentleman in Egypt, utilising the pyramids in the background to provide that valuable environmental sense of place. 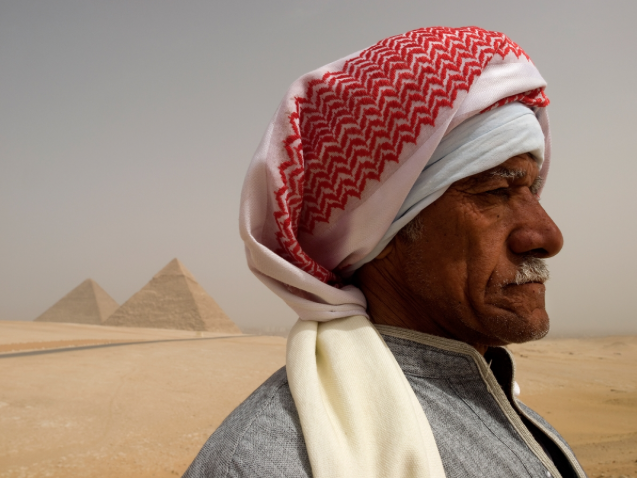 Gentleman near the pyramids in Giza. I waited until the road in the background was clear of vehicles. Why? I wanted this to be a timeless image, and including cars would have dated it.
Technical Information: Olympus E-30, 12-60mm f2.8, 1/250th @f8 200 ISO Lexar 200x CF Card

One of the biggest benefits of photographing people? I can’t tell you how many friends I’ve made worldwide because of the camera. This little box with lens has given me the excuse/reason to approach people pretty much anywhere. Getting a little nerve up, gauging the safety of the situation, and showing interest in what that person is doing has resulted in my being invited to dinners, to parties, to meet family, the list goes on. And, when we travel, isn’t that what we are looking for, a way to get beyond that veneer of tourism and see the real world of that place? 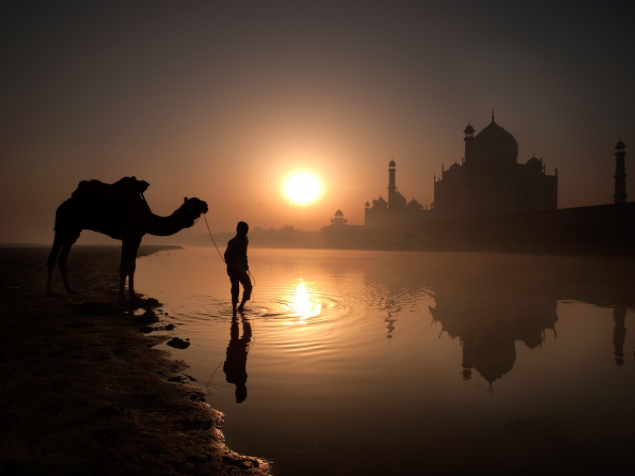 Jay Dickman has been shooting pictures professionally for more than 35 years. Dickman was the winner of the 1983 Pulitzer Prize for Feature Photography for his coverage of the war in El Salvador, as well as the World Press Golden Eye and The Sigma Delta Chi Gold Medal for Distinguished Service in Journalism, in addition to many regional and national photography awards. A National Geographic Photographer (with more than 25 assignments), Jay’s also shot for TIME, Life, Fortune and Forbes, and his work appears in leading publications around the world. Jay has also been a Contributing Editor to American Way Magazine (the in-flight magazine for American Airlines) and POLO Magazine. Dickman’s work also appeared in almost all of the “Day in a Life of…” series including: America, China, the Soviet Union, Spain, Italy, Ireland and California, as well as the Interactive books, “Passage to Vietnam” and “Twenty Four Hours in Cyberspace.”