Android 9.0 Pie, the latest Android operating system update is finally out and confirming many of our speculations it comes with a bounty of sizzling new features. Yes, unlike the previous three or four updates that were mostly concerning minor tweaks or performance improvement, this OS update came with several fresh new features.

Carry on reading to check out 5 awesome new features available within the all-new Android 9.0 Pie. 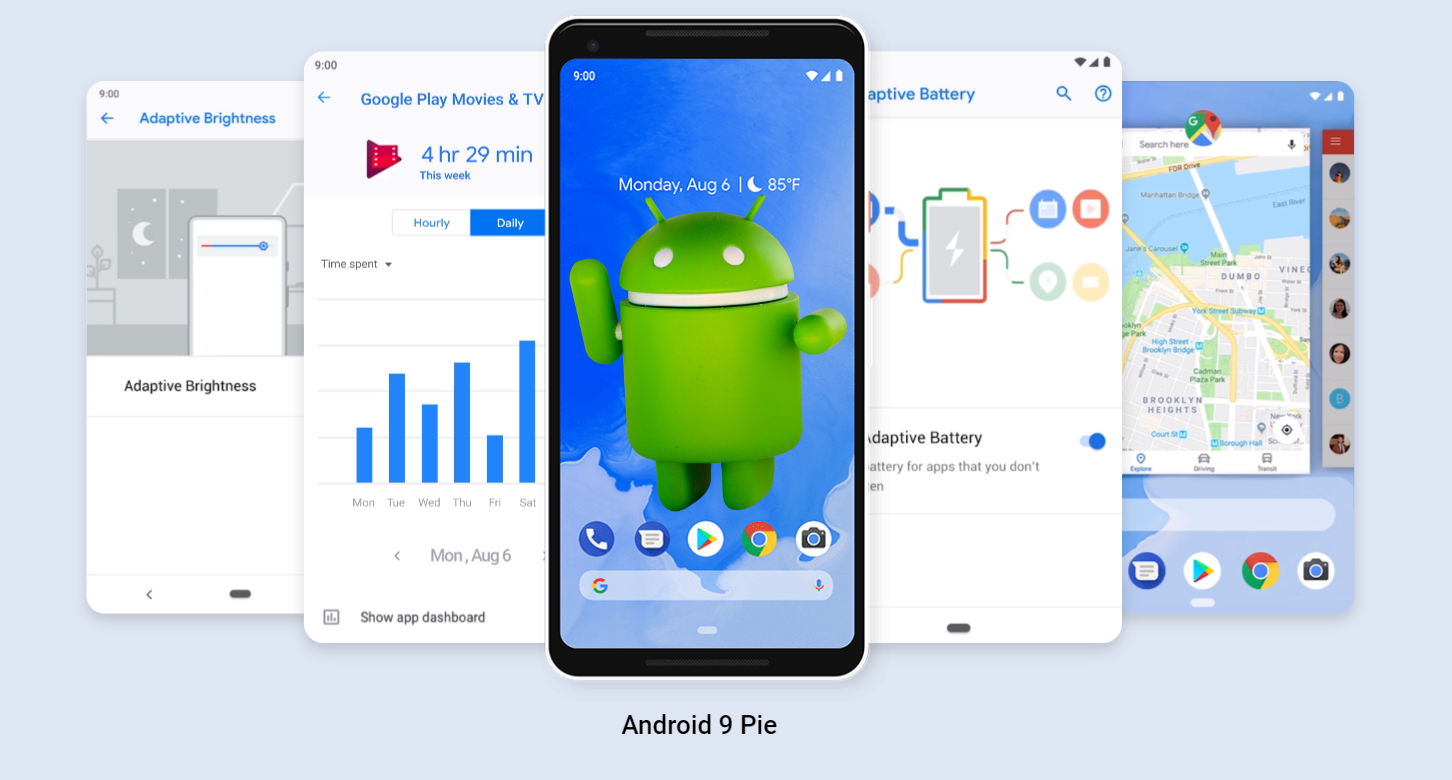 Anyone who has used Android smartphones for a while now will be used to navigating with the three buttons at the bottom of the device. Now, Android Pie allows you to do the same but with gesture-based navigation instead of pressing these buttons.

Android Pie has attempted to address the battery usage problem of previous operating systems, by replacing the old ‘Doze’ feature of Android Marshmallow. While Doze only used to switch unused apps into sleep mode to save unnecessary battery usage, the all-new Adaptive Battery of Pie takes it one step further by intuitively adjusting battery usage based on your preferred or commonly accessed apps. It allows some apps that are often used by the user to get more share of the battery power while limiting battery usage for others. But while this comes as the default battery setting, you can always change it by going into the settings.

Android Pie has also introduced a separate automatic feature to adjust the brightness for apps as per your preference. However, you can make your device learn about your preferred brightness in a different context by tweaking the settings through the Quick Settings panel.

Android Pie comprises a few really promising features for your interaction with apps. Apart from providing full-screen app previews, the horizontal app switcher also works as the launch pad for multitasking. Just by using overview mode you can copy and paste text between multiple apps. This will allow switching between apps and interacting with them much easier.

While in the past devices used to make suggestions about apps based on user actions, Android Pie predicts your purpose and objective of using an app and accordingly makes suggestions. Instead of suggesting apps it will suggest actions. Just when you are about to connect your headphones, it will ask you whether you want to listen to the track you were playing last.

Excessive and addictive use of our handheld devices has been a subject of health and social concern for quite a few years. However, It is time to address the issue through device mechanisms, and Android Pie ‘Digital Well-being’ came just in time. This new feature will inform the user how they use their phone and how they can minimise the use.

The feature will give you access to a dashboard where you can see the time spent on each app within the phone. It will also show the number of notifications that come to your phone and the way you respond to them. You will be able to set timers for any app to help the device automatically cut you off when the time limit you set is over. There is also a ‘Do Not Disturb’ feature to silence the notifications when you do not want to be disturbed. In addition to this, Android Pie offers a feature called ‘Wind Down’, which turns your phone screen grey and dull when you need rest.

App Slices are very similar to the App Actions available on Android 9.0 Pie. Although, this feature is predominately meant for developers. It offers a slice of the user experience of the app when one searches for an app.

For example, if you search for “Uber”, the app slice will not only just show you a visual piece of the app UI but will also showcase the ride-booking feature and help you interact with the features instantly. This allows users to view the important features of an app without having to download the app immediately.

Overall, it seems that Google has packed Android 9.0 Pie with innovative and cutting-edge features that can take user experience to new heights. In spite of the promise, it must be noted that some of these features will not be fully available until late autumn this year.

Author Bio: Juned Ghanchi is the CMO at IndianAppDevelopers, a mobile app development company that have a specialized team of app developers in India who provides Android and iOS application development for all business domains. Juned is always looking for new mobile technologies ideas and shares with others through blogs.